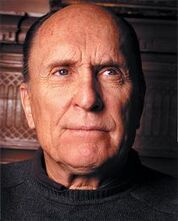 Robert Duvall (born January 5, 1931) is an American actor. He is best known in films such as To Kill a Mockingbird, The Godfather and its sequels and Apocalypse Now.

Born in San Diego, California, Robert Duvall's first film appearance was To Kill a Mockingbird in 1962. He achieved two Academy Award nominations, both of which was for working with Francis Ford Coppola, director of The Godfather.

Duvall portrayed as Tom Hagen in the 1972 film The Godfather, where he helped Coppola get Al Pacino to star as Michael Corleone. He also, along with James Caan and Marlon Brando, began a wave of on set 'moonings'.

Duvall reprised the role in The Godfather Part II but did not appear in Part Three due to a salary disagreement. He did however, reprise the role of Hagen for The Godfather: The Game in 2006 and The Godfather II (video game) in 2008. He is still a respected figure in the acting world to this day.