watch 00:59
The Loop (Movies)
Do you like this video?
Robert Englund 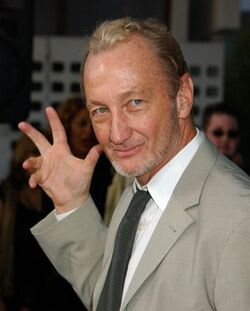 Robert Barton Englund (born June 6, 1947) is an American actor, voice-actor, singer, and director, best known for playing Freddy Krueger, in the Nightmare on Elm Street film series. He played the character in eight films including Freddy vs. Jason.

Robert Englund was born in Glendale, California, to Janis (née MacDonald) and John Kent Englund, an aeronautics engineer. He has Swedish, Danish, Scottish, and English ancestry.

Englund began studying acting at the age of twelve, accompanying a friend to a children's theater program at California State University, Northridge. While he was in high school, he attended the Cranbrook Theatre School (organized by the Cranbrook Educational Community) in Bloomfield Hills. He then attended UCLA for three years, before dropping out and transferring to Michigan's Oakland University, where he trained at the Meadow Brook Theater at the time a branch of the Royal Academy of Dramatic Art.

Retrieved from "https://movies.fandom.com/wiki/Robert_Englund?oldid=96763"
Community content is available under CC-BY-SA unless otherwise noted.