watch 00:59
The Loop (Movies)
Do you like this video?
Robert Zemeckis 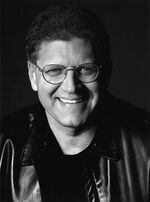 Robert Zemeckis (born May 14, 1951 in Chicago, Illinois) is an American Academy Award-winning director, Academy Award-nominated screenwriter and producer who directed and co-wrote (with his writing partner Bob Gale) all Back to the Future films.

Other than the Back to the Future trilogy, Zemeckis is widely known for directing successful films such as Who Framed Roger Rabbit, Death Becomes Her, Forrest Gump (for which he won the Academy Award for Best Director), Contact and The Polar Express.

Some of his films, such as Back to the Future Part II, Who Framed Roger Rabbit, Death Becomes Her, Forrest Gump and The Polar Express, are characterized by the use of state-of-the-art special effects.

Retrieved from "https://movies.fandom.com/wiki/Robert_Zemeckis?oldid=120876"
Community content is available under CC-BY-SA unless otherwise noted.