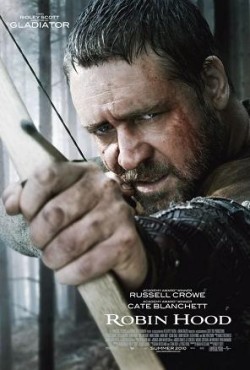 Robin Hood is a 2010 British-American epic historical drama film based on the Robin Hood legend, directed by Ridley Scott and starring Russell Crowe. It is due for release on May 14, 2010.

The film began development in 2007 when Universal acquired a script entitled Nottingham, depicting a heroic Sheriff of Nottingham to be played by Crowe. Scott's dissatisfaction with the script led him to delay filming, and during 2008 it was rewritten into a story about Robin Hood becoming an outlaw, with the position of being Sheriff as part of the story. Scott dropped the latter notion and Nottingham was retitled to reflect the more traditional angle. Russell Crowe decided to grow his hair long for the role during the filming of Body of Lies and State of Play. Though when it came down to filming, he later decided to cut his hair short. Originally to play Maid Marian was Sienna Miller, but dropped out right before filming. Cate Blanchett was brought in to play Maid Marian.

It is late 12th century England and Sir Robin of Loxley, Earl of Huntington, (Russell Crowe) has returned to his North English village after fighting in the Third Crusade. Upon arrival, the nobleman and his servant discover the oppression caused by the new Sheriff of Nottingham Matthew Macfadyen. Sir Robin uses his intelligence and military skills to free his home village from tyranny and corruption in England, by taking back what is rightfully his, and by taking back what rightfully is theirs, to restore justice and happiness to England. Robin must also win the affection of the recently widowed Lady Marion (Cate Blanchett) while leading his Merry Men of Sherwood Forest to victory and fairness.

In January 2007, Universal Studios and Brian Grazer's Imagine Entertainment acquired a spec script written by Ethan Reiff and Cyrus Voris, creators of the TV series Sleeper Cell. Their script portrayed a more sympathetic Sheriff of Nottingham and less virtuous Robin Hood, who become involved in a love triangle with Maid Marian. The writers received a seven-figure deal for the purchase. Actor Russell Crowe was cast into the role of the Sheriff of Nottingham with a salary of $20 million against 20% of the gross. The following April, director Ridley Scott was hired to helm Nottingham. He had attempted to get rights for himself and 20th Century Fox, but had collaborated with Grazer on American Gangster and signed on as director rather than producer. Scott was not a fan of previous film versions of Robin Hood, saying "the best, frankly, was Mel Brooks' Men in Tights, because Cary Elwes was quite a comic".

In June, screenwriter Brian Helgeland was hired to rewrite the script by Reiff and Voris. Producer Marc Shmuger explained Scott had a different interpretation of the story from "the script, [which] had the sheriff of Nottingham as a CSI-style forensics investigator". Scott elaborated the script, portraying the Sheriff of Nottingham as being Richard the Lionheart's right-hand man, who returns to England to serve Prince John after Richard's assassination. Though Scott felt John "was actually pretty smart, he got a bad rap because he introduced taxation so he's the bad guy in this", and the Sheriff would have been torn between the "two wrongs" of a corrupt king and an outlaw inciting anarchy. Locations were sought in North East England including Alnwick Castle, Bamburgh Castle, and Kielder Forest. A portion of filming was intended to take place in Northumberland. As a result of the WGA strike, production was put on hold. Scott sought to begin production in 2008 for a release in 2009.

Filming was scheduled to begin in August in Sherwood Forest if the 2008 Screen Actors Guild strike did not take place, for release on 26 November 2009. By July, filming was delayed, and playwright Paul Webb was hired to rewrite the script. The film was moved to 2010. The Sheriff of Nottingham's character was then merged with Robin. Scott explained Robin "has to retire to the forest to resume his name Robin. So he was momentarily the Sheriff of Nottingham." Hedgeland returned to rewrite, adding an opening where Robin witnesses the Sheriff dying in battle, and takes over his identity. Scott chose to begin filming in February 2009 in forests around London, having discovered many trees which had not been pollarded. Scott was also pleased that the 200 acre Nottingham set that was built during 2008 had aged into the landscape. By February 2009, Scott revealed Nottingham had become his version of Robin Hood, as he had become dissatisfied with the idea of Robin starting as the Sheriff. Filming began 30 March 2009. In June and July, the crew will begin filming at Freshwater West, in Pembrokeshire, Wales. Filming also took place in the Bourne Wood at Farnham, Surrey during summer 2009 and in Dovedale near Ashbourne, Derbyshire

Retrieved from "https://movies.fandom.com/wiki/Robin_Hood_(2010)?oldid=186479"
Community content is available under CC-BY-SA unless otherwise noted.