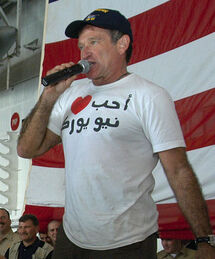 Robin McLaurin Williams (born July 21, 1951 – August 11, 2014) was a notable Academy Award-winning American actor and comedian. As an actor he has had several starring roles on television, stage, and film.

Williams was born in 1951 in Chicago, Illinois and raised in Bloomfield Hills, Michigan and Marin County, California. While in California, Robin attended Redwood High School in Larkspur and grew up in the suburb of Tiburon. In Michigan, he attended Detroit Country Day School, which boasts other famous alumni, including Steve Ballmer from Microsoft and Courtney Vance from Law and Order: Criminal Intent. Robin's father, Robert Fitzgerald Williams, of English, Welsh and Irish descent, was a senior executive at Ford in charge of the Midwest area. Robin's mother Laurie was a New Orleans-born former model of French descent. He has two half-brothers. He described himself as a quiet child whose first imitation was of his grandmother to his mom. He did not overcome his shyness until he became involved with his high school drama department.

Williams first achieved notice for his stand-up routines performing for tips and working clubs like the Purple Onion in San Francisco. After studying at Claremont McKenna College (then called Claremont Men's College) with the Strut and Fret theatre group in Claremont, California, and at Juilliard Drama School (where he befriended and roomed with actor Christopher Reeve), he was cast by Garry Marshall as the alien Mork in a guest role in the TV series Happy Days.

As Mork, Williams improvised much of his dialogue and devised plenty of rapid-fire verbal and physical comedy, speaking in a high, nasal voice. Mork's appearance was so popular with viewers that it led to a spin-off hit television sitcom, Mork and Mindy, which ran from 1978 to 1982. Williams became an overnight sensation, and Mork was featured on posters, coloring books, lunchboxes, and other merchandise. His nonsensical catchphrases, including the greeting "nanoo nanoo" and the swear word "shazbat", were widely known.

In the '80s, Williams began to reach a wider audience with his standup comedy, including two Home Box Office (HBO) comedy specials, An Evening with Robin Williams (1982) and Robin Williams: Live at the Met (1986). His standup work has been a consistent thread through his career, as is seen by the success of his one-man show (and subsequent DVD) Robin Williams Live on Broadway (2002).

The majority of Williams' acting career has been in film, although he has given some memorable performances on stage as well (notably as Estragon in a production of Waiting for Godot). His first starring roles, Popeye (1980) and The World According to Garp (1982), were both considered flops, but with Good Morning, Vietnam (1987) Williams was nominated for an Academy Award and established a screen identity. Many of his roles have been comedies tinged with pathos (for example, The Birdcage, Mrs. Doubtfire).

In particular, his role as the Genie in the animated film Aladdin was instrumental in establishing the importance of star power in voice actor casting. Later, Williams once again used his voice talents in Bicentennial Man, the 2005 animated feature Robots, and an uncredited vocal performance in 2006's Everyone's Hero.

Williams had also starred in dramatic films, earning himself two subsequent Academy Award nominations: first for playing an unorthodox and inspiring English teacher in Dead Poets Society (1989), and later for playing a troubled homeless man in The Fisher King (1991). Other acclaimed dramatic films included Awakenings (1990), What Dreams May Come (1998), and Jakob the Liar (1999).

In 1997, he won an Oscar as Best Supporting Actor for his role as a psychologist in Good Will Hunting. However, by the early 2000s, he was thought by some to be typecast in films such as Patch Adams (1998) and Bicentennial Man (1999) that critics complained were excessively maudlin. This apparently prompted Williams to take radically unconventional roles, beginning with the dark comedy as a lowlife kiddie show host in Death to Smoochy, followed by One Hour Photo in a watershed performance as an obsessed film developer, Insomnia as a sociopathic writer, and The Final Cut, which is more in tune with Williams as a protagonist.

He was known for his wild improve skills and impersonations. Because his quick-wit performances frequently involved ingenious humor designed and delivered in rapid-fire succession completely while on stage, he was widely regarded as one of the greatest impromptu comedians of all time. He was a talented mimic and could jump in and out of characters and various accents at an extremely fast pace. Williams stated that he began doing impersonations as a child, mimicking his aunt's southern accent.

His most recent role was in the movie The Night Listener, a screen adaption of the popular mystery novel, in which he plays a radio show host who must figure out the story behind a mysterious fourteen-year-old caller.

He was portrayed by Chris Diamantopoulos in the made-for-TV biopic Behind the Camera: The Unauthorized Story of Mork & Mindy (2005), documenting the actor's arrival in Hollywood a struggling comedian and becoming an overnight star when he landed the role in Mork & Mindy.

In the 2006 Nickelodeon Kids' Choice Awards, he was the Surprise Guest.

On August 9, 2006, it was reported that Williams recently entered himself into a rehabilitation center for alcoholism. His publicist has confirmed, saying "After 20 years of sobriety, Robin Williams found himself drinking again and has decided to take proactive measures to deal with this for his own well-being and the well-being of his family. He asks that you respect his and his family's privacy during this time. He looks forward to returning to work this fall to support his upcoming film releases."

Williams resided in a large house in the upper-class Sea Cliff neighborhood of San Francisco.

Williams was a self-confessed gamer known to enjoy online video games, recently playing Warcraft 3, Half-Life[3] and the first-person shooter Battlefield 2 as a sniper.[4] In addition, he also played the tabletop wargame Warhammer 40,000. In an interview for a video game magazine, he stated that Nintendo contacted him once and told him because of his love of video games, if there ever is a live action Pokémon movie made, he would be their first, last and only choice to play Professor Oak.Template:Fact He also named his daughter Zelda because his son is a devoted fan of the Legend of Zelda video game series.Template:Fact Williams was even in talks to do a voice for the game Half-Life 2, because he was a big fan of the series. However, scheduling conflicts prevented this.Template:Fact

On January 6, 2006, he performed live at Consumer Electronics Show during the Google keynote.[5]

In the 2006 E3, on the invitation of Will Wright, he demonstrated the creature editor of Spore while simultaneously commenting on the creature's look: "This will actually make a platypus look good."[6] He also complimented the game's versatility, comparing it to Populous and Black & White. Charity work

Robin and Marsha founded the Windfall Foundation, a philanthropic organization to raise money for many different charities. Williams devoted much of his energy doing work for charities, including the Comic Relief fund-raising efforts. He was also a cycling fan, known to own hundreds of bicycles and to attend the Tour de France. Through his interest in cycling, he was a friend and supporter of Lance Armstrong and his foundation, performing at events for the foundation.

On August 11, 2014, Williams committed suicide in his Paradise Cay, California, home. His body was cremated at Montes Chapel of the Hills in San Anselmo and his ashes were scattered over San Francisco Bay the day after his death.

The final autopsy report, released in November 2014, concluded that he "died of 'asphyxia due to hanging'" (as suspected by the Marin County sheriff's office on August 12). Williams was also found with superficial wounds to his hands and arms, most likely caused by a pocketknife lying nearby. Neither alcohol nor illegal drugs were involved, and prescription drugs present in his body were at "therapeutic" levels. The report also noted that Williams had been suffering "a recent increase in paranoia". An examination of his brain tissue suggested Williams suffered from "diffuse Lewy body dementia".[148] Describing the disease as "the terrorist inside my husband's brain", his wife Susan Schneider said, "however you look at it—the presence of Lewy bodies took his life," referring to his previous diagnosis of Parkinson's.

The Lewy Body Dementia Association (LBDA) clarified the distinction between the term used in the autopsy report, diffuse Lewy body dementia—which is more commonly called diffuse Lewy body disease and refers to the underlying disease process—and the umbrella term, Lewy body dementia—which encompasses both Parkinson's disease dementia (PD) and dementia with Lewy bodies (DLB). According to LBDA spokesperson Dennis Dickson, "The report confirms he experienced depression, anxiety and paranoia, which may occur in either Parkinson's disease or dementia with Lewy bodies ... In early PD, Lewy bodies are generally limited in distribution, but in DLB, the Lewy bodies are spread widely throughout the brain, as was the case with Robin Williams."

Wikiquote has a collection of quotations from or about:
Robin Williams
Community content is available under CC-BY-SA unless otherwise noted.
Advertisement