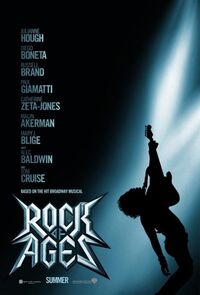 Rock of Ages, scheduled for released on June 1, 2012, is a Rock n' Roll musical film starring Tom Cruise based on the Broadway musical of the same name. The original musical opened in 2006, written by Chris D'Arienzo and featuring the music of Journey, Def Leppard' Foreigner, Poison, Styx, Bon Jovi, Asia, Pat Benatar, Twisted Sister, and more. The film has been under production since May, 2011.

"Set in 1987 Los Angeles, Drew and Sherrie are two young people chasing their dreams in the big city. When they meet, it's love at first sight, though their romance will face a series of challenges." [1]

Retrieved from "https://movies.fandom.com/wiki/Rock_of_Ages?oldid=262335"
Community content is available under CC-BY-SA unless otherwise noted.