watch 01:45
The Loop (Movies)
Do you like this video?
Play Sound
Rogue One 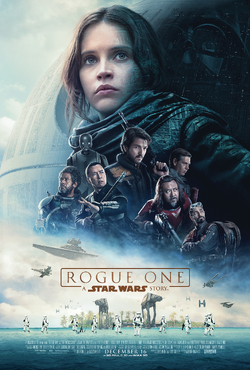 Rogue One: A Star Wars Story (or simply Rogue One) is a 2016 American epic space-opera film directed by Gareth Edwards. The screenplay by Chris Weitz and Tony Gilroy is from a story by John Knoll and Gary Whitta. It was produced by Lucasfilm and distributed by Walt Disney Studios Motion Pictures. It is the first installment of the Star Wars anthology series. The cast includes Felicity Jones, Diego Luna, Ben Mendelsohn, Donnie Yen, Mads Mikkelsen, Alan Tudyk, Riz Ahmed, Jiang Wen, and Forest Whitaker.

Based on an idea first pitched by Knoll ten years before it entered development, the film was made to be different in tone and style from the traditional Star Wars films, omitting the customary opening crawl and transitional screen wipes. Principal photography on the film began at Pinewood Studios near London in early August 2015 and wrapped in February 2016. The film then went through extensive reshoots directed by Gilroy in mid-2016. Rogue One follows a group of rebels on a mission to steal the plans for the Death Star, the Galactic Empire's super weapon, just before the events of A New Hope.

Following the foundation of the Galactic Empire, a wayward band of Rebel fighters come together to carry out a desperate mission: to steal the plans for the Death Star before it can be used to enforce the Emperor's rule.

Director Gareth Edwards stated that the style of the film will be similar to that of a war film, stating, "It's the reality of war. Good guys are bad. Bad guys are good. It's complicated, layered; a very rich scenario in which to set a movie."

Rogue One Celebration Poster.jpg
Add a photo to this gallery

ROGUE ONE Official Teaser Trailer
Add a photo to this gallery

Retrieved from "https://movies.fandom.com/wiki/Rogue_One:_A_Star_Wars_Story?oldid=268154"
Community content is available under CC-BY-SA unless otherwise noted.