watch 00:59
The Loop (Movies)
Do you like this video?
Roller Coaster Rabbit 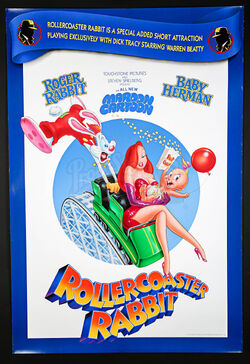 Roger Rabbit, Baby Herman and Mrs. Herman are at the local county fair. Mrs. Herman is going to get her palm read by a fortune teller, she ask Roger to watch Baby Herman until she gets back and messes up again or else. Roger reluctantly watches Baby Herman. Baby Herman loses his red balloon and Roger goes to get him a new one. Before he returns, however, Baby Herman sees another red balloon at a dart game and goes to try to get it. When Roger comes back to give Baby Herman his balloon, he finds that he is gone, and the chase begins. First, Baby Herman finds himself following the balloon into a field occupied by a grazing bull. Roger soon follows the youngster and falls in bull dung. Baby Herman walks directly underneath the bull. He notices a round balloon-like object and grasps it; unknown to him, it is in fact the bull's scrotum. The grazing creature snaps. Roger picks up Baby Herman but just happens to be looking the bull in the eyes. The animal hurls Roger and Baby Herman into the air, sending them flying out of the field and the two land crashing into a roller coaster carriage which is traveling slowly up.

In the next stage of this short, the carriage continues to climb a tall hill in the track. The two reach the top of the drop which is exaggerated to reach beyond the clouds and into space. Roger looks down and sees the world. Moments later the carriage drops down thousands of meters. The speed of the drop is maintained throughout the remainder of the chase. After a few twist and turns (in the track) a shot of Jessica Rabbit appears, where she is tied down to the tracks, unable to move. She calls out to be saved before Roger and Baby Herman's carriage crushes her. As the cart draws near, it topples over and fortunately bounces over Jessica, avoiding her completely. The camera moves along and beside her appears Droopy for a quick one-liner. The story then continues. Roger grasps onto Baby Herman, tumbling and losing their carriage, leaving Roger sliding along the tracks with his feet, gradually gaining friction causing his feet to catch fire. The tracks run into a dark tunnel and then stumbles across a 'wrong way sign'. Finally Herman and Roger crash through the sign and into a real-life filming studio, a direct reference to the reality/cartoon crossover in the feature film.

Roller Coaster Rabbit (along with Trail Mix-Up) was produced at The Magic of Disney Animation located at Disney-MGM Studios in Lake Buena Vista, Florida.[9] Rob Minkoff returned to direct the second short in the series.

Spielberg wanted the short to appear with Arachnophobia, Hollywood Pictures' first feature and a co-production between Disney and Amblin. However, CEO Michael Eisner opted to release the short with the US theatrical release of Touchstone Pictures' Dick Tracy, in hopes that the short would increase awareness to the film. Spielberg, who controlled a 50% ownership stake in the character, decided to cancel Hare in My Soup, the third short that had entered production. All the Re-released: Toy Story (1995, USA), Mulan (1998, UK) and Dinosaur (2000, Australia)

Retrieved from "https://movies.fandom.com/wiki/Roller_Coaster_Rabbit?oldid=263166"
Community content is available under CC-BY-SA unless otherwise noted.