Moviepedia
Register
Don't have an account?
Sign In
Advertisement
in: 1954 Births, Actors from Oklahoma, Film directors from California,
and 2 more

View src
watch 02:07
Spider-Man: No Way Home Trailer Dropped - The Loop
Do you like this video?
Play Sound
Ron Howard 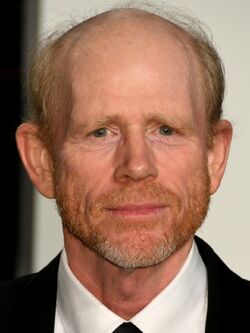 Ronald William Howard (born March 1, 1954) is an American actor, director, producer, and screenwriter. In his early career, Ron was mainly known as an actor starring in many popular films in the 1970s such as American Graffiti and The Shootist, as well as starring as Richie Cunningham in the iconic television series Happy Days.

He switched careers to directing in the 1980s, directing such pictures as Willow. Ron would see his directorial career flourish following Apollo 13, winning an award from the Directors Guild of America for it. He'd go on to direct A Beautiful Mind, this time winning the Academy Award for Best Director and Best Picture.

Besides that, Ron has also directed Cinderella Man, The Da Vinci Code, and Solo: A Star Wars Story.