Start a Wiki
watch 01:27
The Loop (Movies)
Do you like this video?
Ronee Blakley 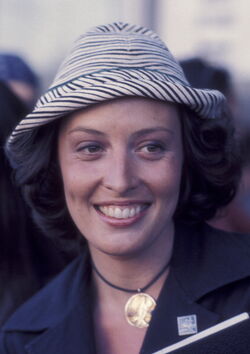 Ronee Sue Blakley (born August 24, 1945) is an American singer, songwriter, composer, producer and director, she is perhaps best known as an actress. She is best known in Nashville as Barbara Jean for which she won a National Board of Review Award for Best Supporting Actress and in the 1984 film A Nightmare on Elm Street as Marge Thompson.

Blakley was born in Nampa, Idaho, the daughter of Ronald and Carol Blakley (née Brown). She has three siblings, one who died of AIDS in 1996. She studied at Mills College, Stanford University, and went to New York to attend Juilliard for post-graduate work.

Retrieved from "https://movies.fandom.com/wiki/Ronee_Blakley?oldid=96920"
Community content is available under CC-BY-SA unless otherwise noted.