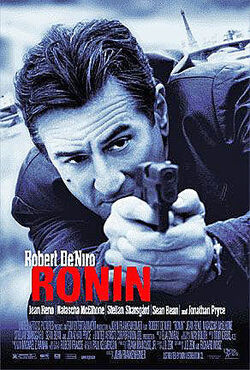 Ronin is a 1998 crime-thriller film directed by John Frankenheimer and written by J.D. Zeik and David Mamet. It stars Robert De Niro and Jean Reno as two in a group of former special forces and intelligence agents who team up to steal a mysterious, heavily guarded suitcase while navigating a maze of shifting loyalties and alliances. The film is noted for its car chases through Nice and Paris.

A freelancing former US intelligence agent tries to track down a mysterious package that is wanted by both the Irish and the Russians.

Retrieved from "https://movies.fandom.com/wiki/Ronin?oldid=57398"
Community content is available under CC-BY-SA unless otherwise noted.