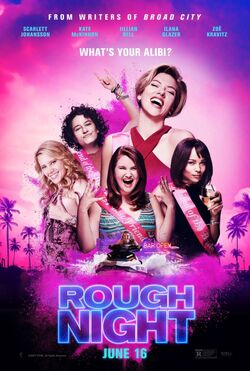 In 2006, four friends, Jess, Alice, Frankie and Blair, bond during their first year of college at George Washington University. A decade later they plan a reunion as Jess is about to get married to her fiancé Peter, and Alice decides that the four should spend the weekend in Miami partying. By this point, Alice is a teacher, Frankie is an activist with two convictions on her criminal record, Blair is a real estate agent in the middle of a bitter divorce who still has conflicting feelings over her past relationship with Frankie, and Jess is a state senate candidate whose campaign is hampered by the fact that the general public do not find her relatable despite her policies focusing on helping others.

Once in Miami, the four are joined by Pippa, Jess's friend from her semester in Australia. The friends get high and party at a club and then Frankie decides to hire a male stripper, Jay. When Jay arrives at the door, he makes Jess uncomfortable with his aggressive talk. Alice decides to take a turn and jumps on him, causing them to both fall and Jay to break his neck on the corner of the fireplace, killing him. Before they decide what to do, Jess takes a call from Peter and mentions during her panic that her friends hired a stripper and she is confused, before Alice destroys her phone and Blair confiscates the others to prevent anyone making calls until they can determine their next move. Peter takes this to mean that Jess is leaving him and decides to race down to Miami to convince Jess to take him back.

The friends purchase a burner phone and call Blair's uncle, who is a lawyer. After telling him they moved the body, he tells them that, while they may have gotten away with accidental death if they had made the call immediately, they could face up to fifteen years in prison for tampering with the crime scene unless no body is found. The friends decide to dispose of the body by throwing it into the ocean. After doing so, they realize that their neighbors, Lea and Pietro, have a security camera that may have caught them. They send Blair to get the tape, as the pair had previously expressed interest in a ménage à trois with Blair, only to have her discover the cameras do not work after she has had sex with them. By this point, the body has washed up on the shore and they must come up with a new plan to dispose of it.

A police officer, Scotty, knocks on their door and Frankie knocks him out after he gropes her, only for the friends to realize that he was the actual stripper they had ordered, leaving them to wonder whom they killed. They use Scotty's car to try to dispose of the body again only to return home defeated after a car accident when the car goes over a speed bump too quickly. Then when Alice finds out Jess invited Frankie and Blair to a bridal shower over her, Jess verbally berates her for her obsessive clinginess and storms off to prepare for the consequences.

At this point, Detectives Frazier and Ruiz arrive and tell the women they are not in trouble, as the man they killed was a violent criminal who had been on the run from the police. As they interrogate the women, Pippa realizes that the detectives are actually the accomplices of the man they killed when she spots the TV displaying all three men as suspects in a jewelry robbery. Realizing that they are caught, Frazier and Ruiz tie the women and Scotty up and threaten to shoot them. Jess meanwhile has missed most of the drama due to being upstairs taking a shower in preparation for her mugshot. Realizing what has happened, she manages to subdue Frazier using hairspray and handcuffs when he comes up to search for the diamonds, and kills Ruiz as he prepares to kill Blair. Frazier returns, having freed himself from the handcuffs using the key, only to be run over when Peter, high on the drugs he took to keep him awake on his roadtrip to Miami, crashes through the front of the house, killing him.

Jess reaffirms that she wants to marry Peter and the two wed that weekend. Frankie and Blair decide to reunite as a couple and Alice hooks up with Scotty. Pippa confirms that the police have dismissed all charges as their victims were all criminals, and the deaths can be excused as self-defense. Jess receives a call from her campaign manager revealing that these events have caused her approval rating to go up significantly with the voters after capturing dangerous criminals; in addition to her new reputation as a party girl has helped make her more relateable to voters.

In a post-credits scene, Jess and Peter drive Alice home after a night out. Alice enters her apartment and looks for something to eat. She pours pasta into a pan, and discovers that there are diamonds mixed in with the pasta—the same diamonds that Jay stashed in their house for safekeeping.

Retrieved from "https://movies.fandom.com/wiki/Rough_Night?oldid=181146"
Community content is available under CC-BY-SA unless otherwise noted.