watch 00:59
The Loop (Movies)
Do you like this video?
Rules Don't Apply 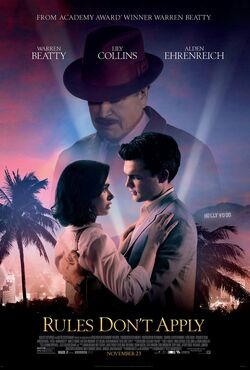 In 1958 Los Angeles, Frank Forbes is a driver working for mogul Howard Hughes. He picks up Marla Mabrey, a devout Baptist beauty queen under contract with Hughes' film studio RKO Pictures, receiving $400 a week ($3,540 today) and living in a beautiful home with her strict mother Lucy. Frank becomes Marla's primary driver, taking her to singing and dance classes.

Marla awaits her screen test for Stella Starlight, but she and her mother are frustrated by delays, compounded by the fact that they have yet to meet Hughes. Marla befriends fellow RKO starlet Mamie. Hughes’ employee Levar Mathis regularly reminds Frank that the starlets cannot have boyfriends, and the chauffeurs must avoid friendships with the girls. Frank is devoutly religious, though he and his fiancée Sarah have secretly had sex. When Lucy decides that they should return to Virginia, Marla opts to continue waiting for her screen test.

With her mother gone, Frank and Marla form a connection. He lets her drive the car, and shares details of his relationship with Sarah when Marla confides her virginity. Marla reveals her worries about conforming to the Hollywood "rules" of being a great singer, dancer, or having a big bosom; Frank assures her the rules do not apply to her. Marla finally meets Hughes in a private bungalow, where she turns down his offer of a drink and talks frankly about her acting aspirations. Nadine, Hughes' executive secretary, sets up Marla's screen test. Frank also meets Hughes for the first time; taking an immediate liking to Frank, Hughes brings him into his inner circle of staff.

Hughes becomes reclusive, worried that minority shareholders at Trans World Airlines (TWA), who openly disagree with his running of the company, will have him committed. His right-hand-man Noah Dietrich upsets Hughes by suggesting he see a psychiatrist, and Hughes is advised to get married so his "wife" can refuse to sign commitment papers. Marla's screen test is a meaningless façade. She sings Frank a song she wrote for him, leading to a passionate kiss. They stop themselves; Marla says that she feels like an adulterer, but Frank says he will break up with Sarah.

Marla is called to another late-night meeting with Hughes where, upset about Frank, she consumes alcohol for the first time. When Hughes finally joins her, a very drunk Marla tells him how special he is. She performs her song for Hughes, who becomes emotional and suddenly proposes marriage, resulting in them having sex. The next day, Frank is devastated when Marla reveals she is engaged – she does not say to whom – and rudely dismisses him.

Within days, Hughes marries Jean Peters to protect him from being committed and fires Noah, hiring Robert Maheu as CEO of his companies. Maheu warns him that TWA shareholders could force Hughes to appear in court on charges of mismanagement.

Marla is upset for believing Hughes' proposal and having sex with him. When she informs him that she is pregnant with his child, Hughes suggests she is lying and looking for money. Again dismissive and rude to Frank, Marla returns to Virginia.

Hughes takes his entourage out of the country, becoming increasingly reclusive. When the courts decide in favor of the minority TWA shareholders, with a judgement for $645 million, Hughes has to sell his most cherished asset, his father's original Hughes Tool Company, to pay off the debt.

In 1964, Frank, Levar, and Nadine wait for Hughes to call the American press concerning a book written by Miskin, Mamie's ex-boyfriend, who claims to have interviewed Hughes in person and that Hughes has complete dementia, which could cost him the rest of his empire. Marla arrives with Matt, her and Hughes' five-year-old son, and news that Mamie is ready to confirm in court that Miskin never met Hughes, so Hughes does not need to make the call. Learning Matt is there, Hughes finds the strength to make the phone call anyway, and talks in great detail about current and past events, proving he is lucid and confirming that he has never met Miskin.

Frank immediately quits his job and goes after Marla and Matt. They leave together to live as a family in Los Angeles.

Retrieved from "https://movies.fandom.com/wiki/Rules_Don%27t_Apply?oldid=200875"
Community content is available under CC-BY-SA unless otherwise noted.