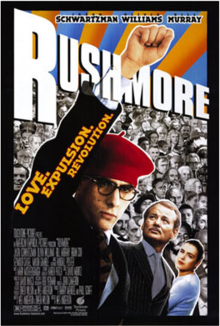 Rushmore is a 1998 comedy-drama film directed by Wes Anderson about an eccentric teenager named Max Fischer (Jason Schwartzman), his friendship with rich industrialist Herman Blume (Bill Murray), and their mutual love for elementary school teacher Rosemary Cross (Olivia Williams). The film was co-written by Anderson and Owen Wilson. The soundtrack was scored by regular Anderson collaborator Mark Mothersbaugh and features several songs by bands associated with the British Invasion of the 1960s.

The movie helped launch the careers of Anderson and Schwartzman, while establishing a "second career" for Murray as a respected actor of independent cinema. Rushmore also won Best Director and Best Supporting Male awards at the 1999 Independent Spirit Awards while Murray earned a Golden Globe nomination for Best Performance by an Actor in a Supporting Role in a Motion Picture.

Retrieved from "https://movies.fandom.com/wiki/Rushmore_(film)?oldid=125367"
Community content is available under CC-BY-SA unless otherwise noted.