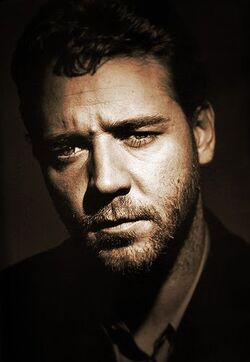 Russell Crowe is a New Zealand born Australian actor, film producer and musician. He came to international attention for his role as Roman General Maximus Decimus Meridius in the 2000 historical epic film Gladiator, directed by Ridley Scott, for which he won an Academy Award for Best Actor,

After initial success in Australia, Crowe began acting in American films. He co-starred with Denzel Washington in Virtuosity and with Sharon Stone in The Quick and the Dead in 1995. He went on to become a three-time Oscar nominee, winning the Academy Award as Best Actor in 2001 for Gladiator. Crowe was awarded the (Australian) Centenary Medal in 2001 for "service to Australian society and Australian film production."

Crowe received three consecutive best actor Oscar nominations, for The Insider, Gladiator and A Beautiful Mind. Crowe won the best actor award for A Beautiful Mind at the 2002 BAFTA award ceremony, as well as the Golden Globe and Screen Actors Guild Award for the same performance. However, he failed to win the Oscar that year, losing to Denzel Washington. It has been suggested by the Guardian and Entertainment Weekly that his attack on television producer Malcolm Gerrie for cutting short his acceptance speech may have turned voters against him.

All three films were also nominated for best picture, and both Gladiator and A Beautiful Mind won the award. Within the six year stretch from 1997–2003, he also starred in two other best picture nominees, L.A. Confidential and Master and Commander: The Far Side of the World. In 2005, he re-teamed with A Beautiful Mind director Ron Howard for Cinderella Man. In 2006 he re-teamed with Gladiator director Ridley Scott for A Good Year, the first of two consecutive collaborations (the second being American Gangster co-starring again with Denzel Washington, released in late 2007). While the light romantic comedy of A Good Year was not greatly received, Crowe seemed pleased with the film, telling STV in an interview that he thought it would be enjoyed by fans of his other films.

In recent years, Crowe's box office standing has declined. The Hollywood stock market (HSX) share Russell Crowe (RCROW), issued in 1997, however maintains constant accretion. Crowe appeared in Robin Hood, a film based on the Robin Hood legend, directed by Ridley Scott and released on 14 May 2010.

Crowe starred in the 2010 Paul Haggis film The Next Three Days, an adaptation of the 2008 French film Pour Elle.

Crowe will be taking on the role of Inspector Javert in the musical film of Les Misérables.