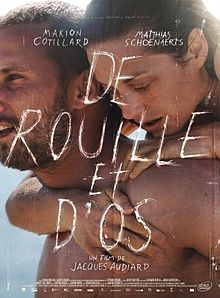 Rust and Bone (French: De rouille et d'os) is a 2012 French-Belgian film directed by Jacques Audiard, starring Marion Cotillard and Matthias Schoenaerts. It is based on Craig Davidson's short story collection with the same name, and it tells the story of an unemployed 25-year-old man who falls in love with a killer whale trainer.

Put in charge of his young son, Ali leaves Belgium for Antibes to live with his sister and her husband as a family. Ali's bond with Stephanie, a killer whale trainer, grows deeper after Stephanie suffers a horrible accident.

Add a photo to this gallery
Retrieved from "https://movies.fandom.com/wiki/Rust_%26_Bone?oldid=74595"
Community content is available under CC-BY-SA unless otherwise noted.