Start a Wiki
watch 01:27
The Loop (Movies)
Do you like this video?
Rutger Hauer 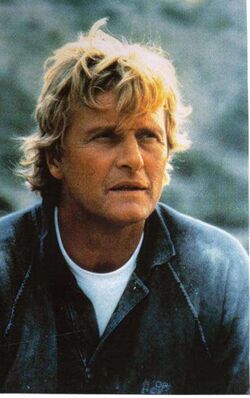 Rutger Oelsen Hauer is a Dutch/Frisian actor, born January 23, 1944 in Breukelen, the Netherlands.

The son of drama teachers Arend and Teunke, Hauer grew up in Amsterdam but at age 15 ran off to sea and spent a year scrubbing decks aboard a freighter. Returning home, he worked as an electrician and a carpenter for three years while attending drama classes at night school. He went on to join an experimental acting troupe, which he stayed with for five years before getting the lead role in the very successful 1969 television series Floris, a Dutch Ivanhoe-like medieval action show, which made his name in the Netherlands.

His career changed course when director Paul Verhoeven gave him the lead in Turkish Delight (1973) (based on the Jan Wolkers book of the same name).The movie found box-office favour abroad as well as at home and within two years, its star was invited to make his English language debut in the British film The Wilby Conspiracy (1975). This film was set in South Africa and starred Michael Caine and Sidney Poitier, and was an action melodrama with a focus on apartheid. Hauer's supporting role, however, was hardly enough to establish him in Hollywood's eyes, and he returned to Dutch film making for several years. In this period he made Katie Tippel (1975), and worked again with Verhoeven on Soldier of Orange (1979), and Spetters (1980). Incidentally these two films also paired Hauer with fellow international Dutch actor Jeroen Krabbé.

It was in the Sylvester Stallone vehicle Nighthawks (1981) that he finally made his American debut. Cast as a psychotically cold-blooded terrorist named Wulfgar, he made a strong impression, which was confirmed by a major role the following year as the chief android Roy Batty (pitted against Harrison Ford) in Ridley Scott's science fiction film Blade Runner (1982).

He went on to be the adventurer courting Gene Hackman's daughter (Theresa Russell) in Nicholas Roeg's poorly received Eureka (1983), the investigative reporter opposite John Hurt in Sam Peckinpah's The Osterman Weekend (1983) and the knight paired with Michelle Pfeiffer in the medieval romance Ladyhawke (1985). He continued to make an impression on audiences, especially in The Hitcher (1986), in which he was the mysterious Hitchhiker intent on murdering C. Thomas Howell's lone motorist and anyone who crossed his path en route. At the height of his fame he was even set to be cast as RoboCop in the film directed by old friend Verhoeven.

Italian director Ermanno Olmi mined the gentler, more mystic and soulful side of Hauer's personality in The Legend of the Holy Drinker (1989), the story of a lost soul who dies of drink in Paris while attempting to pay a debt of honour in a church. Phillip Noyce also attempted to capitalize, with far less success, on Hauer's spiritual qualities in the martial arts action adventure Blind Fury (1989). He returned to science fiction opposite Joan Chen with Salute of the Jugger (1990), in which he played a former champion in a post-apocalyptic world. He and Chen would again work together in two more science fictions films - Deadlock and Precious Find.

By the 1990s, Hauer was as well known for his humorous appearances in Guinness commercials as for his screen roles. It seemed that he had increasingly become involved in lower budget films, including Split Second, which was set in a flooded London after global warming, Omega Doom, another post-apocalyptic story in which he plays a soldier-robot, and recently New World Disorder, opposite Tara Fitzgerald. In between these lower budgeted films, he appeared in the music video "On a Night Like This" by Kylie Minogue. In the late 1980s and 1990s, as well as 2000, he also appeared in several British and American television productions, including Inside the Third Reich (as Albert Speer), [[Escape from Sobibor, Fatherland, Hostile Waters, Merlin, and The 10th Kingdom.

He has recently been on the comeback trail as small parts in big films, again playing villains with Confessions of a Dangerous Mind (2003), Sin City (2005) and Batman Begins (2005)

Outside of acting as an environmentalist, he fought for the release of Greenpeace's co-founder, Paul Watson, who was convicted in 1994 for sinking an illegal Norwegian whaling vessel, and has set up an AIDS research foundation called the Rutger Hauer Starfish Foundation. He married his second wife, Ineke, in 1985, and has a daughter from his first marriage.

Retrieved from "https://movies.fandom.com/wiki/Rutger_Hauer?oldid=178592"
Community content is available under CC-BY-SA unless otherwise noted.