Start a Wiki
watch 01:27
The Loop (Movies)
Do you like this video?
Safe 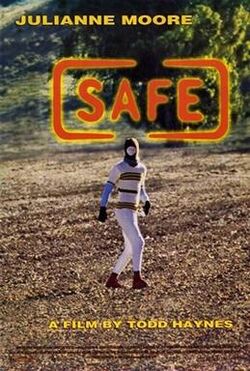 Safe is a 1995 British-American thriller written and directed by Todd Haynes, and produced by Christine Vachon. It was voted the best film of the 1990s in the 1999 Village Voice Film Poll.

Set in an affluent neighbourhood of the San Fernando Valley in 1987, the film recounts the life of a seemingly unremarkable homemaker, Carol White (Julianne Moore) who develops multiple chemical sensitivity (MCS, also known as "Twentieth-Century Disease"). MCS is a medically controversial diagnosis in which a person develops mild to severe non-specific symptoms and believes that these symptoms are triggered by chemicals found in everyday household and industrial products.

Carol passes her days with activities such as gardening, taking clothes to the dry cleaners, and attending aerobics classes. Her marriage is stable but devoid of emotional intimacy, and her son is actually a stepson from her husband's previous marriage. Her friendships are polite but distant.

As she goes about her routine, she slowly begins to develop unpredictable and strange bodily reactions, such as persistent fatigue, uncontrollable coughing (when surrounded by truck exhaust while driving), asthma-like symptoms (at a baby shower), nose bleeds (when getting a perm at a hair salon), vomiting, and eventually convulsions (at the dry cleaners).

Doctors are able to identify only one true allergy: milk, which she drinks frequently in the movie without incident. Doctors are at a loss of how to help her cope or cure her. She attends some psychotherapy sessions, but does not gain any insight into her condition.

After seeing an ad at her community center, she eventually resorts to moving to the New Age/religious retreat in the desert called Wrenwood, which is designed to help people suffering from MCS recover.

Retrieved from "https://movies.fandom.com/wiki/Safe_(1995)?oldid=26472"
Community content is available under CC-BY-SA unless otherwise noted.