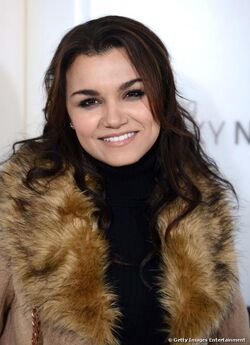 Samantha Barks is a Manx professional singer and actress who came third in the BBC talent show-themed television series I'd Do Anything in 2008. On Tuesday 31 January 2012, Cameron Mackintosh appeared during the curtain call of the Oliver! UK tour (then running at the Palace Theatre in Manchester) to announce that Barks would play Eponine in the film version of the long running musical Les Misérables (watch a video of the moment below). Barks later tweeted this as the 'Most incredible moment of my life'. 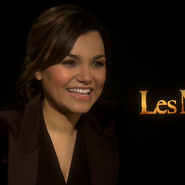 Cameron Mackintosh interrupts the curtain call of Oliver! to announce that Barks will play Éponine in the Les Misérables motion picture:

Barks sings "On my Own" in the Les Misérables: 25th Anniversary Concert:

Retrieved from "https://movies.fandom.com/wiki/Samantha_Barks?oldid=66281"
Community content is available under CC-BY-SA unless otherwise noted.