watch 00:59
The Loop (Movies)
Do you like this video?
Samurai Cop 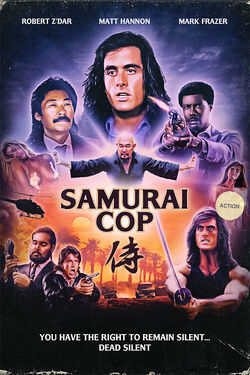 The film has attained a cult following, and is often cited as one of the worst films of all time.

When a renegade Japanese gang known as the Katana take control of the cocaine trade in Los Angeles, the LAPD transfer in a Samurai Cop from the SDPD to help tackle the problem. Joe Marshall has been trained by the masters in Japan and speaks fluent Japanese, but dresses like a commoner.

An attempted bust meets with failure after a bizarre car chase leads to multiple deaths and the only witness burned and unable to testify. Katana boss Fuj Fujiyama orders the injured Katana member to be executed and his head displayed on a piano to remind all functioning Katana members of their code of silence. Joe and his partner Frank confront the Katana at the Carlos'n Charlie's restaurant on Sunset Boulevard and attempt to reprimand them into obeying the law. When that fails, Fujiyama's right-hand man Yamashita wages war in the parking lot, executing his own men who fail to subdue Joe and Frank, thus maintaining the code of silence.

Joe then stalks Fujiyama's girlfriend Jennifer and seduces her. They have sexual relations while several of his police comrades are tortured and killed by the Katana gang who are looking for him. Unable to contain his anger any longer, commanding officer Captain Rohmer sanctions an assassination of every single Katana gang member. Joe and Frank head to Fujiyama's compound and gun down every living person and a final sword battle between Joe and Yamashita ends the reign of terror. To celebrate, Joe and Jennifer once again have relations.

Filming took place over several months, starting in June 1990. When actor Hannon had considered shooting to be finished, he had his hair cut short, only to be told that further shooting was to be done. Director Shervan obtained a ladies' wig for the actor, which can be seen in several close up shots throughout the movie.

Amir Shervan could not afford lighting to shoot at night so the entire film is set during the day. Actors also wore their own clothes and drive their own cars. Much of the film was also shot without sound and done with single takes. Shervan had to dub on voices months after production but could not get many of the bit part actors to return. He chose to use his own voice and warped it in post-production to sound different. His lack of ability to do this correctly resulted in ADR with a heavily robotic sound.

The film was never given a theatrical release, though Polish distributor Demel International Corporation released it on VHS. It was released on DVD by Media Blasters in 2004 and on DVD in 2013 and Blu-Ray in 2014 by Cinema Epoch. Gregory Hatanaka, founder of Cinema Epoch, has also produced and directed a sequel, Samurai Cop 2: Deadly Vengeance.

Since its release, the film has been referenced in text and video reviews about bad movies.

On March 25, 2016, Samurai Cop was released as a VOD title by RiffTrax. The RiffTrax edition received a two-day theatrical release in April 2017, provided by Fathom Events.

Retrieved from "https://movies.fandom.com/wiki/Samurai_Cop?oldid=151972"
Community content is available under CC-BY-SA unless otherwise noted.