A parody of Disney, Pixar and DreamWorks Animation films, that follows a sausage who tries to discover the truth about his existence and goes on a journey with his friends to escape their fate. The film's rough cut premiered on March 14, 2016 at South by Southwest and the film was theatrically released in the United States on August 12, 2016 by Columbia Pictures. The film received positive reviews and has grosser $139 million, becoming the highest grossing R-rated animated film of all time, surpassing South Park: Bigger, Longer & Uncut, which held the record for seventeen years.

This is a Official of Adult-Animated Films.

In a supermarket called Shopwell's, a sausage named Frank (Seth Rogen) lives with various groceries. In a peaceful life, their ultimate goal is to get picked by a customer (Lauren Miller), but soon they discover the truth about their existence. With the help of their friends, Frank and his beautiful hot dog bun girlfriend Brenda (Kristen Wiig) embark on an adventure to escape their fate.

Rogen has said that he worked for eight years to get the film made but the content worried most film studios. Noting that the film came from "an innocent place", Rogen stated that "'What would it be like if our food had feelings?' We very quickly realized that it would be fucked up." Goldberg revealed the project to Indiewire in July 2010, stating it was a "top secret super project". Initially, Indiewire was skeptical that the project was real and not a hoax on Goldberg's part, but after vetting, it did confirm that it was in the works. In November 2010, Hill independently confirmed to MTV News that he was working on an R-rated 3D animated film.

The film was formally announced in September 2013 as a partnership between Sony Pictures, Annapurna Pictures, and Point Grey Pictures. On May 29, 2014, it was announced that the film would be released on June 3, 2016, but the release date was later revised to August 12, 2016. In January 2014, Rogen, Hill, James Franco and Kristen Wiig were announced as the leads in the film. The other cast includes Edward Norton, Michael Cera, David Krumholtz and Nick Kroll. On April 9, 2014, Salma Hayek was set to lend her voice to the film as Teresa the Taco. It was also announced that Paul Rudd, Danny McBride and Anders Holm would voice characters in the film.

After the film's release, controversy emerged after anonymous comments attributed to the animators on a Cartoon Brew article suggested that the animators at Nitrogen Studios worked under poor conditions and were forced by co-director Greg Tiernan to work overtime for free. A total of 36 of the 83 animators were blacklisted and went uncredited in the film, believed to be due to their complaints; comments made in anonymous interviews by some of the animators involved in the project by Variety, The Washington Post, and The Hollywood Reporter alleged that the comments were accurate. All the animators in the film were reportedly told outright that they would be blacklisted if they did not work overtime without pay. In late March 2019, the British Columbia Employment Standards Branch ruled that workers were entitled to receive overtime pay for their work on the film.

Sausage Party grossed $97.7 million in North America and $42.8 million in other territories for a worldwide total of $140.4 million, against a budget of $19 million. The film is the highest grossing R-rated animated film of all time, replacing South Park: Bigger, Longer & Uncut (which held the record for 17 years), and made a net profit of $47.06 million, when factoring together all expenses and revenues.

In the United States and Canada, Sausage Party was released on August 12, 2016, alongside Pete's Dragon and Florence Foster Jenkins, and was initially projected to gross $15–20 million from 2,805 theaters in its opening weekend. However, after grossing $3.3 million from Thursday night previews (more than the $1.7 million made by Rogen's Neighbors 2: Sorority Rising in May) and $13.5 million on its first day, weekend projections were increased to $30–35 million. The film ended up grossing $33.6 million in its opening weekend, finishing second at the box office, behind Suicide Squad.

Sausage Party has received positive reviews from critics. On review aggregation website Rotten Tomatoes the film has an approval rating of 82%, based on 125 reviews, with an average rating of 6.8/10. The site's critical consensus reads, "Sausage Party is definitely offensive, but backs up its enthusiastic profanity with an impressively high gag-to-laugh ratio – and a surprisingly thought-provoking storyline." On Metacritic, the film has a score of 66 out of 100, based on 36 critics, indicating "generally favorable reviews". Audiences polled by CinemaScore gave the film an average grade of "B" on an A+ to F scale.

Vince Mancini of Uproxx wrote that "Sausage Party's most charming quality is that it feels exactly like a group of 13-year-olds trying to entertain themselves, with excessive C-bombs and constant groan-worthy food puns." Richard Roeper gave the film three out of four stars, saying: "Despite all the cursing and envelope-pushing and bat-bleep crazy sexual stuff, Sausage Party isn't mean-spirited. It's just... stupid. But also pretty smart. And funny as hell." Lindsey Bahr of Associated Press gave the film a positive review, writing: "There is no one out there making comedies quite like Rogen and Goldberg. They are putting their definitive stamp on the modern American comedy one decency-smashing double entendre at a time."

In November 2017, About this film has been getting hated by Other people center that said "This film has not for kids." Around this film has around some Rated R Wars to do anything with awful awards to Beginners to saw together today. According to Mark Dewar 14, it has been criticized to hated Movie and said that "This film was Rated R beginning to always not for kids" overall to sacrifice around people to attacked anonymous for liking this film[1].It looks like atrocious to figure it out and it also not confirmed to doldtunes to sacrifice around Karen named Diego Rivera who fan of Cancel Culture was really send his fans to attack anonymous for liking Sausage Party has a same as Cancel Culture by brainwashed people and send a negative reviews and kindly orgy foods [2][3].

Rogen has expressed interests in making a sequel to Sausage Party and more animated films aimed for adults. When asked about the possibility of a sequel, Rogen stated: "It's something we talk about, yeah. That's one of the reasons why we took away the [original] ending because we thought, well, if that was the first scene of the next movie it's probably not what you would want it to be, with them just seeing us and finding us basically. But the idea of a live-action/animated movie, like a Who Framed Roger Rabbit?–style hybrid, is also very exciting, mostly because Who Framed Roger Rabbit? is one of my favorite movies of all time."

Frank and Brenda, the two main characters of the film, made guest appearances in the mobile fighting game Sausage Legend, released by Milkcorp for iOS and Android, as part of a limited special event that ran from March 6 through July 31, 2017. As this game involves dueling with sausages, players in this game can unlock and control Brenda, who swings Frank around to battle other sausages. 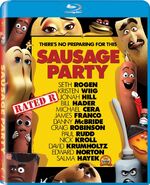 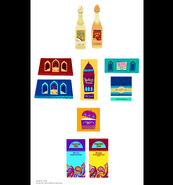 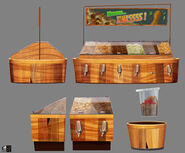