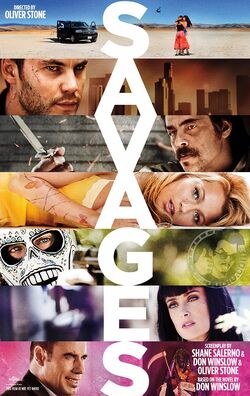 Savages is a crime and thriller film directed by Oliver Stone.

It is based on the novel of the same name by Don Winslow, who co-wrote the script with Stone and Shane Salerno. The star-studded cast features stars Taylor Kitsch, Aaron Johnson, Blake Lively, John Travolta, Benicio del Toro, and Uma Thurman.

Pot growers Ben and Chon face off against the Mexican drug cartel who kidnapped their shared girlfriend.

Retrieved from "https://movies.fandom.com/wiki/Savages?oldid=119344"
Community content is available under CC-BY-SA unless otherwise noted.