View src
watch 01:33
House of the Dragon Trailer - The Loop
Do you like this video?
Play Sound
Saw 3D 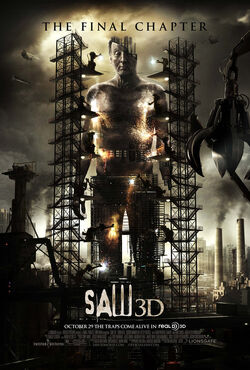 Dr. Lawrence Gordon has survived his test after sawing off his foot to escape the bathroom and along the way, he cauterizes his ankle stump with a steam pipe. Five years later, another game takes place in a home improvement storefront of a public square where two shoplifters, Brad and Ryan, are bound to opposite sides of a worktable secured to a sliding carriage with buzzsaws while their mutual lover Dina is suspended above a third saw. The men have sixty seconds to shove the saws into their opponent to save Dina, who had manipulated both of them into fulfilling her needs by committing crimes. Realizing her betrayal, Ryan and Brad concede a truce and they drive the sawblade towards Dina, bisecting her.

After witnessing Mark Hoffman's survival from his trap, Jill Tuck seeks help from Internal Affairs detective Matt Gibson and offers to incriminate Hoffman in exchange for protection and immunity. Meanwhile, Hoffman abducts a gang of skinhead white supremacists and places them in a trap at an abandoned junkyard that kills all four of them. He also captures Bobby Dagen, a self-help guru who achieved fame and fortune by falsifying a story of his own survival. Bobby awakens in an abandoned psychiatric hospital and is informed that he has one hour to save his wife Joyce, who is chained to a steel platform that gradually pulls her down as she watches Bobby's progress. After escaping his cage hanging over a floor of spikes, Bobby navigates his way through the asylum, attempting to complete his other tests and to rescue Nina, his publicist; Suzanne, his lawyer; and Cale, his best friend, all who knew of Bobby's lies and aided him in fabricating his story. But despite his efforts, all of them are killed in their respective traps. Bobby eventually unlocks the door with the combination from his upper wisdom teeth and reunites with his wife.

Gibson discovers the location of Bobby's game and sends a SWAT team, who are sealed in another room and killed by toxic gas. Finding Hoffman's command center, Gibson realizes that Hoffman gained access to the police station during the games, having been brought into the morgue in a body bag with the intent of hunting down Jill. Before he is able to warn the station, Gibson is killed by an automatic turret gun along with both of his men. Bobby is forced to reenact his supposed escape from the trap he survived, by driving two hooks through his pectoral muscles and hoisting himself above the ceiling to deactivate Joyce's trap. However, before Bobby is able close the circuit, his strength fails and he falls, unable to continue. As the time expires, a brazen bull capsule closes around Joyce and incinerates her. Hoffman infiltrates the police station, killing everyone in his path before reaching Jill, and restrains her with the original Reverse Beartrap, which kills her.

Hoffman then destroys his workshop and begins to leave town but is subdued by three pig-masked figures, of which the leader reveals himself to be Dr. Gordon, now an accomplice to Jigsaw, who found him after he escaped from the bathroom and ordered him to protect Jill to fulfill his legacy. Gordon shackles Hoffman in the same bathroom where he was tested, before tossing the hacksaw he had used to saw his foot off with out of the room and seals the door, leaving Hoffman to die.