View src
watch 01:33
House of the Dragon Trailer - The Loop
Do you like this video?
Play Sound
Saw V 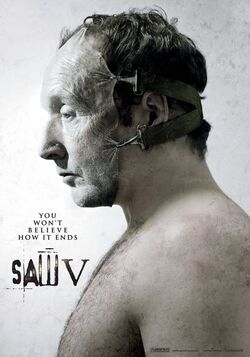 Convicted murderer Seth Baxter wakes up chained to a table beneath a pendulum blade. A videotape informs him that he can release himself by crushing his hands between two presses. He does so, but the blade still swings down and bisects him as someone watches through a hole in the wall. In the present, after being locked in the sickroom at the meatpacking plant by Detective Mark Hoffman, FBI Agent Peter Strahm escapes through a hidden doorway but is attacked in the tunnel by a figure in a pig mask. He wakes up with his head sealed in a box being filled with water but survives by performing a tracheotomy with his pen. Outside, Hoffman delivers Corbett Denlon to the police and claims they are the only survivors but is shocked when Strahm is brought out alive as well.

During a press conference, Hoffman is promoted to Detective Lieutenant and credited with closing the Jigsaw case. He finds a note in his office reading "I Know Who You Are," and he learns of Agent Lindsey Perez's death while taking Strahm's cell phone from the police evidence room. At the hospital, Strahm tells Hoffman that Perez's last words were "Detective Hoffman" and questions how he escaped the plant. After being put on medical leave by his boss, Dan Erickson, Strahm, suspicious of Hoffman, decides to uncover his involvement with Jigsaw and takes case files of past Jigsaw victims to research them on his own.

In an underground sewer level, five people – Ashley, Brit, Charles, Luba, and Mallick – awaken with collars locked around their necks, connected by cables to a set of blades mounted on the wall behind them. The keys to the collars are in individual glass boxes across the room. A videotape informs them that they are all connected and need to complete multiple tests to survive; they are also told to "do the opposite" of their instincts throughout the game. Everyone survives the first game but Ashley, who fails to retrieve a key and gets decapitated when the collars retract. In the second room, which is filled with explosives on a timer, Mallick, Brit, and Luba each retrieve keys to bomb shelters set in the walls, leaving Charles to die when the timer expires and the explosives detonate. In the third room, Brit kills Luba and she and Mallick connect her corpse to five cables to complete an electric circuit that unlocks the next door. In the final room, Mallick and Brit find a machine fitted with five saws and a beaker requiring ten pints of blood to open the final door. They realize that all prior tests could have been completed without victims if they worked together, and figure out their connection: they were all involved in a building fire that killed eight people. Mallick and Brit concede a truce and each slice an arm in the saws to provide the blood needed to open the door.

Meanwhile, Strahm learns that Hoffman killed Baxter as revenge for murdering his sister, and made it look like a Jigsaw game to get away with the crime. It is revealed through flashbacks that he was later abducted by John Kramer, who blackmailed Hoffman into becoming his first apprentice. It is also revealed through flashbacks that Hoffman assisted Kramer in kidnapping Paul Leahy for his test in Saw as well as assisting Kramer in setting up the nerve gas house from Saw II. Strahm concludes that everyone was meant to die at the plant except for Corbett and Hoffman, who would appear as a hero. Elsewhere, Strahm's activities draw Erickson's concern, which is further fueled when John's ex-wife Jill Tuck, who received a box and a videotape from John's will, approaches him and claims Strahm is stalking her. After Hoffman tells Erickson about Strahm's theory of a second accomplice, Erickson tries to call him; Hoffman intercepts the call on Strahm's phone and immediately hangs up. Now suspecting that Strahm is involved, Erickson has one of his agents track the phone's signal.

Following the signal to an observation room for the sewer game, Erickson finds the phone and his own personnel file, both planted by Hoffman. He also finds the still-living Brit and Mallick and calls for medical attention, before putting an all-points bulletin on Strahm, convinced that he is Jigsaw's successor. Meanwhile, Strahm follows Hoffman to the renovated nerve gas house and finds an underground room containing a box filled with broken glass shards and a tape. In the tape, Hoffman urges Strahm to enter the box, but he stops it short and ambushes Hoffman, whom he seals in the box. Strahm believes he has finally caught Hoffman, but the door to the room shuts itself and the walls begin to close in as the box is lowered into the floor. Strahm finishes playing the tape, which warns him that if he does not enter the box, he will die and edited tapes will be broadcast to frame him as Jigsaw's apprentice. Hoffman descends safely beneath the floor as Strahm is crushed to death.