Start a Wiki
watch 01:38
The Loop (Movies)
Do you like this video?
Scary Movie 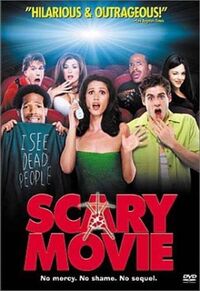 Scary Movie is an 2000 American film directed by Keenen Ivory Wayans, is a comedy-gross-out film spoof that parodies the horror and mystery genres. Several mid- and late-2000s movies are skewered, including the Scream trilogy, The Sixth Sense, I Know What You Did Last Summer, The Usual Suspects, The Matrix, and The Blair Witch Project.

It was promoted with the tagline "No mercy. No shame. No sequel.", with the last reference being to the tendency of popular horror movies to become long-running franchises. However, in 2001, Scary Movie 2 was released (with the appropriate tagline "We lied"). A second sequel, Scary Movie 3, followed in 2003. Scary Movie 4 was released on April 14, 2006.

This hilarious, must-see comedy smash places Carmen Electra (TV's Batwatch), Marlon Wayans (Senseless), Jon Abrahams (Boiler Room, The Faculty), and some of today's hottest young stars in a wickedly funny send-up of today's most popular horror movies! A familiar-looking group of teenagers find themselves being stalked by a more-than-vaguely recognizable masked killer! As the victims begin to pile up and the laughs pile on, none of your favorite scary movies escape the razor-sharp satire of this outrageously funny parody! With Shannon Elizabeth, Shawn Wayans, and Cheri Oteri adding sidesplitting performances, there's nothing to fear in this scary movie ... unless you're afraid of laughing too much.

The movie follows the same general plot as the first Scream movie. The opening starts with a young woman, Drew Decker (Carmen Electra), being called at home by a mysterious caller. He eventually lures her outside and stabs her before the opening titles.

The next scene flashes to the main star, Cindy Campbell (Anna Faris), a student at a high school, on her computer at home. She hears a rustling noise outside her window and goes over to investigate. Suddenly a hand appears on her window sill. She screams but quickly recovers to find it's only her boyfriend, Bobby (a parody on the first A Nightmare on Elm Street movie). On hearing Cindy scream, her dad comes over to her room. He talks about leaving town because he stole some money from his pot smuggling friends. When her father leaves, Bobby tries to seduce Cindy, but she says she doesn't want to have sex with him. He asks if they can have dry-sex and she says ok. They start getting into it, but when he feels her up he gets an electric shock. He then lifts up her nighty to find an electric fence around her underwear and breasts, saying "NO TRESPASSING". Cindy laughs nervously and says "My dad...!"

She then tells him to leave. He reassures her he doesn't want to pressure her into sex. He then motions he wants to see her breasts. She then replies with, "will you settle for PG-13?" A confused look strikes Bobby's face as Cindy opens up her nighties to reveal an out of shape man's hairy chest. He falls out of the window due to disgust as Cindy just giggles.

The next scene is set at B.A. Corpse High School the next day. We see a girl, Brenda, coming out of a bus with a boy, Shorty, and Brenda telling Shorty to go to class. Shorty says he does go to class. Brenda then says "Lunch is not a class, Shorty!" Shorty replies with "It is when you've got the munchies! (drugs)" Brenda rolls her eyes and claims that that's why Shorty's such a dumbass. Shorty, upon seeing this says "Your mother!" insulting Brenda's mother. Brenda then says "You're my brother, Shorty. That's your mother too, jackass." Shorty, realizing his stupidity goes silent for a few seconds but quickly says, "Well then your father's stupid!" Brenda says, "Huh... so... I don't know him. (Implying Brenda and Shorty's mother is a whore.) Brenda walks off as Shorty thinks for a second and says, "...yeah, me neither..."

The next scene shows Cindy and her friend, Brenda, in the morning just before school. Brenda gossips about their other friend, Buffy. In the background you can see Buffy, a nice presentable rich girl kissing her daddy goodbye. She has a little-schoolgirl look with sweet features. Buffy catches up to Brenda and Cindy and says hi. But as soon as Buffy's father drives away she strips of her blouse, knee-length skirt and cardigan to reveal a short mini skirt with a matching tight crop top. She pulls the clips out of her hair and fluffs her self up. She then starts to apply makeup. Cindy takes the lipstick off Buffy and lectures her for using that brand. Cindy says that that make-up company tests their products on animal. She then pulls out a brochure with a gorilla with obvious quantities of make-up smeared on its face.

Buffy says she's a people person (rather than being an animal lover) and that she wants to feed all the hungry children in the world. Suddenly a hobo approaches the three girls asking for a dollar. Buffy says "Ew! You bum! Get away from me!" showing her hyprocrite side. Cindy, being a kind-natured girl gives the bum a sandwich. As Cindy walks on, she is hit by the sandwich thrown by the bum yelling out "I said I wanted a dollar, bitch!" This also implies that the bum only wanted money for prostitutes or alcohol.

The next scene shows two new characters, Greg (Buffy's boyfriend) and Ray (Brenda's boyfriend). They are by the lockers. Ray is wearing a bright yellow tight female top. Ray asks Greg if the shirt makes him look gay. Greg says no. Ray twists the shirt so it has a bikini style. He asks the same question again, and although it obviously looks homosexual, Greg says no. This is the first reference to Ray being gay.

The trio of girls come along to the lockers, just to see Greg slamming his locker in fustration. Buffy asks him why he is so angry. He motions for Buffy to read his report card. On the card you can see Greg got an F for all his subjects and a "DUMBASS" stamp is stamped across the page in red. Buffy says, "Well, at least you got one A!" Pointing to the "a" in the word "dumbass". Greg happily says she's right and they start making out. Since Brenda is with her boyfriend, Cindy feels left out. Ray then muses about why Bobby is always late for school as he lives very near.

Then next scene shows Bobby coming out of a trailer house with a beer and a cigarette. He disposes of it and says good-bye to his family. The camera zooms out to reveal the trailer car parked 2 meters from the school. Then you see the 6 friends by the water fountain where they sit for lunch. Cindy talks about the death of Drew (which is now big news), and Ray says "Oh yeah, didn't she have a brother calles Steve? Gorgeous face, nice lips, perfect ass?" Greg says "Yeah that was her." Ray says "No, I was talking about Steve" (a reference to Ray being gay). Drew was killed exactly one year after "they killed that guy", and they all have a flash back.

All 6 of them are in a car, drunk. Buffy and Greg are making out and Brenda and Ray are making out. Greg shouts put on some music. Ray then says "Oh, put this on," producing a tape. Bobby, the driver puts the tape in. Raining Men starts blaring through the speakers and everyone goes silent staring at Ray who is dancing and singing along. They switch the music and Greg starts to pull Buffy's panties off to reveal a light pink g-string. Ray pulls Brenda's underwear off to reveal giant granny undies. Brenda says it's "laundry day". Again, Ray shows his homosexuality by shoving his finger in Greg's ass.

They hit a man and they think they killed him but really, he is actually unconscious. Cindy is very emotional and wants to tell the police. But Greg said they could get up to 10-15 years in jail, and with all the sex-starved convicts there, they would die before they came out. With this, Ray agrees that they should go to jail (another reference). The unconscious man behind them starts to wake up, telling them it's alright and no harm was done.

Greg decides that they should get rid of the alcohol, so he throws a giant bottle of beer over his shoulder. This bottle hits the man and he falls to the ground unconscious. They all carry the body into the trunk of the car. The man wakes up again, but is knocked unconscious when the trunk slams on his head.

They get ready to throw the body into the water off the jetty. Cindy thinks they should check the man's pocket for ID. Brenda believes they should take his money since they "already killed the guy, might as well steal his money too". Everyone starts to go through the man's clothes. Brenda calls " I got his ring" Buffy Calls "I got his credit ards" Greg calls "I got his wallet!" Ray calls out "I got his drawers!" When they finish robbing the guy, Brenda is seen with a big gold ring, Buffy holding some credit cards and Ray holding some underwear. They throw the guy into the water and make a pact to not tell anyone.

Greg dies first, murdered by the killer as Buffy acts on stage to win the beauty competition. No one believes her cries for help (the crowd thinks she is doing a dramatic reading) and as she rushes off the stage to aid Greg, she's told she's won and forgets all about her now dead boyfriend.

At home, Cindy is attacked by the killer, and coincidentally Bobby shows up after she knocks the killer out of the window. He is arrested, though without evidence, he isn't held.

The next day Buffy is murdered by the killer in the school locker room. Unlike the other murders, not only does Buffy kill herself (pretending to be acting it out), but Buffy's head continues to babble on incessantly, even after the killer stuffs it into a trashcan. Brenda finds herself sitting next to the killer in a movie theater, but is instead killed by the audience, who are sick of her shouting advice to the characters on screen and generally ruining the movie by being loud and obnoxious.

Towards the end of the movie, the killer reveals himself - as being both Ray (Shawn Wayans) and Bobby (Jon Abrahams. Ray kills Bobby, but is killed himself by the actual killer (who is not yet revealed). Sitting in the police station, trying to make sense of everything, Cindy comes to a revelation (parodying the scene in The Usual Suspects when Agent Kujan realizes who Keyser Soze is) - the actual killer is none other than Doofy. The two run out to find him. However, in a scene paralleling the ending of The Usual Suspects, Doofy sheds his outfit and mustache, revealing himself to be a 'cool' guy. He jumps into reporter Gail Hailstorm's car. The two drive off, with Doofy throwing the fright mask out as the final piece of evidence. Cindy stands in the middle of the street, yelling, "Noooo!" until a car comes by and runs her over, ending the movie.

Retrieved from "https://movies.fandom.com/wiki/Scary_Movie?oldid=225192"
Community content is available under CC-BY-SA unless otherwise noted.