watch 01:45
The Loop (Movies)
Do you like this video?
Play Sound
Scream 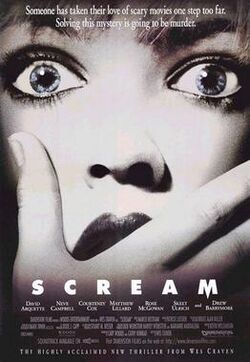 Scream (also know as Scream I or Scream 1) is a 1996 American slasher film directed by Wes Craven and written by Kevin Williamson. The film revitalized the slasher film genre in the mid 1990s, similar to the impact Halloween (1978) had on late 1970s film, by using a standard concept with a tongue-in-cheek approach that combined straightforward scares with dialogue that satirized slasher film conventions. The film features many teen idols of the time, including Neve Campbell, Rose McGowan, Skeet Ulrich, Matthew Lillard, Drew Barrymore, David Arquette and Courteney Cox.

Casey Becker (Drew Barrymore) keeps recieving phone calls from an unidentified caller. At first it seems as if he has gotten a wrong number, but it soon becomes clear he is toying with her, and his voice gets more and more threatening. Casey becomes frightened when she realizes her caller can see her. She begins to panic when the caller threatens to kill her, and forces her to answer movie trivia in exchange for her life and the life of her boyfriend, Steve, who she sees tied up on her back patio. After killing Steve, the caller torments Casey until finally breaking into the house and chasing her; he is dressed in a black costume with a white ghost mask over his face. He chases her across her lawn just as her parents pull up into the driveway. They do not see her, and Casey is stabbed in the chest, unable to scream. After killing Casey, the murderer strings up her body in the back yard for the parents to discover.

We then meet Sidney Prescott (Neve Campbell) and her boyfriend Billy Loomis (Skeet Ulrich). Billy sneaks into her bedroom window and attempts to have sex with her, but Sidney is unsure and wants to remain a virgin for now. They are almost discovered by Sidney's father, Neil (Lawrence Hecht), and he comes into Sidney's room to discuss the fact that he is going out of town. We learn that Sidney's mother was killed almost one year before, and that Sidney and her father are alone. Sidney's testimony identified Cotton Weary (Liev Schreiber) as the killer, although Cotton swears that he is innocent.

The next day, Sidney's school is abuzz with news of the murder, and classes are temporarily cancelled. Sidney decides that since her father is gone and she is alone, she is going to stay with her her best friend Tatum (Rose McGowan). Sidney, Tatum, and BIlly sit with their group of friends, which includes Randy (Jamie Kennedy), who is obsessed with horror movies, and Stu (Matthew Lillard, a class clown type who used to date Casey Becker.

Sidney goes home to wait for Tatum to pick her up. The phone rings and she hears a strange voice, the same one that was on the phone with Casey. At first she thinks it is Randy joking around, but the caller turns abusive and brings up Sidney's mother. "Do you wanna die, Sidney? Your mother sure didn't!" The killer emerges from a closet in Sidney's house and a chase starts through out the house and Sidney locks herself in her bedroom and dials 911. Then Billy arrives, climbing through Sidney's window again, and a cell phone falls out of his pocket. Sidney realizes that it may have been him phoning her and she runs downs stairs and out of the house only to be greeted by the police.

Tatum takes Sidney to her house, where she recieves another phone call from the killer, who tells her "You got the wrong guy, Sidney...again." The next day at school, Sidney is threatened by the killer while she is in the bathroom, but she escapes.

School is over and a curfew is in place, so the group of friends decide to throw a party. Gail Weathers takes a cameraman to the party in an attempt to talk to Sidney, but Dewey intercepts her. The two of them talk and seem to have a mutual affection for one another. They enter the party and Dewey chooses not to bust the partygoers for underage drinking. During the party Billy and Sidney go upstairs and Sidney has sex with him. Meanwhile, Tatum is murdered in the garage by the killer, who has infiltrated the party after all.

After the interlude between Sidney and Billy, the door opens and in walks the killer, who stabs Billy in the back. Another chase starts. Dewey is stabbed. Gale, in her newsvan, swerves to avoid hitting Sidney and runs her car down a hill, striking a tree and appearing to be killed.

Sidney ends up in the house facing Randy and Stu, both claiming the other is the killer. Stu is vying to come inside and obtain the gun, while Randy wants to leave. Eventually Billy stumbles down the stairs, bloodied, and lets Randy and Stu into the house, shooting Randy and turning to reveal that the blood is fake; Billy was only pretending to be stabbed. He was aided by his accomplice, Stu; both of them are the killers. Billy also reveals that he was responsible for killing Sidney's mother, who had an affair with his father. Billy blamed Mrs. Prescott for the dissolution of his parents' marriage, and murdered Mrs. Prescott out of revenge. Billy and Stu also reveal that they have kidnapped Mr. Prescott, who is tied up in a closet. They have framed Mr. Prescott for the murders, and intend to wound themselves to make it look as if Mr. Prescott attacked them, at which point they will kill both him and Sidney.

Billy and Stu inflict flesh wounds on one another with the knife, but they are interrupted by Gail Weathers, who returns, armed with Dewey's gun. Gail forgets to switch off the gun's safety, and a struggle ensues. Sidney strikes back at her tormenters, killing Stu with a television and shooting Billy in the head with the gun. Dewey is revealed to be alive, as is Randy. All ends well as Gale reports that the Macher house has been the scene of what seemed to be some real-life scary movie.

Retrieved from "https://movies.fandom.com/wiki/Scream?oldid=278291"
Community content is available under CC-BY-SA unless otherwise noted.