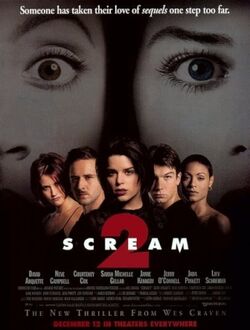 Scream 2 is a 1997 American slasher film created and written by Kevin Williamson and directed by Wes Craven, starring Neve Campbell, Courteney Cox, David Arquette, Sarah Michelle Gellar, Jamie Kennedy and Liev Schreiber. It is the sequel to Scream and the second installment in the Scream film series. It was released on December 12, 1997.

Sidney Prescott and Randy Meeks (Jamie Kennedy) attend Windsor College in Ohio. While attending the preview of Stab, based on a book by Gale Weathers (Courteney Cox) about the Woodsboro murders, Phil Stevens (Omar Epps) is stabbed through the wall of a bathroom cubicle. The killer sits next to Maureen Evans (Jada Pinkett), and she assumes the killer is her boyfriend wearing a mask. During the Casey Becker death scene the crowd goes wild. Taking advantage of this, the killer stabs Maureen. Since many of the movie-goers are wearing the killer's costume (as publicity material provided by the movie studio) and carrying fake knives, nobody takes Maureen's attack seriously. As the crowd realizes she's not faking, she dies. Sidney and other Woodsboro survivor Randy Meeks soon realize that a killer is on the loose again. Meanwhile, Deputy Dewey (David Arquette) arrives on the campus to once again protect Sidney, and she and Dewey have an unwelcome reunion with Gale Weathers.

The killer attempts to stab Sidney while setting up a copycat ploy. Alone in her sorority house, Casey "Cici" Cooper (Sarah Michelle Gellar) is threatened over the phone before the killer attacks her. After the police discover the body, the students at the nearby martini mixer go to investigate, leaving Sidney and her boyfriend Derek at the Delta Lambda Zeta house. The killer attacks Sidney, but Derek helps her escape.

At the police station, Gale and Dewey notice that the names of the victims seem to loosely match the victims from The Woodsboro Murders. The police chief assigns two detectives to protect Sidney. The group is outside amongst dozens of college students when the killer telephones and taunts them. Gale and Dewey search the students in the area who have cell phones, trying to discover the killer. Randy is also looking around while talking to the killer on the phone, hoping to stall them. While he is outside a van, Randy is pulled inside and killed. His body is discovered by Gale and Dewey.

Gale and Dewey visit a lecture room to watch the video footage they have been taking, to perhaps gain a glimpse of the killer. Gale then notices another TV screen playing footage that her cameraman had not taken. The perspective of the video is that of the Killer; showing clips of Cici in the porch and Randy in the park. Finally, it shows the backs of Dewey and Gale as they watch the video. They turn around and notice Ghostface in the projector room and Dewey gives chase. Gale is then cornered in the sound-system room, but manages to hide in the recording compartment. Dewey enters and attempts to get Gale's attention through the soundproof glass, however he is stabbed a couple of times and Gale notices in horror as he slides down the glass, with Ghostface standing behind him. Gale then manages to bar the door from the killer with a fallen shelf and the killer disappears.

The detectives protecting Sidney are attacked while their vehicle is stopped at a traffic light. The killer crashes the car, killing the detectives and knocking the killer unconscious. Sidney and her roommate, Hallie, narrowly escape the wreckage of the car by squeezing past the unconscious killer in the front seat. Sidney decides to remove the killer's mask, but finds the killer gone. She turns around only to see Hallie being stabbed.

Sidney runs to the school theater and is confronted by the killer. The killer reveals himself to be Mickey, her new boyfriend's best friend. Sidney finds Derek tied to a stage prop, and Mickey shoots Derek in the chest. Mickey also has a partner: Sidney turns around to see Gale coming out of the stage door, leading her to believe that Gale is the killer. Gale shakes her head "no" and Debbie Salt comes out, holding the other cop's gun. Sidney recognizes her as Mrs. Loomis, the mother of Sidney's previous boyfriend Billy. Mickey reveals that it was his plan to be caught for the murders so that he would become famous, immortalized by the media. He wanted to blame the killings on horror movies; the "effects of cinema violence in society." He met Mrs. Loomis on a "psycho website" and she agreed to fund his college tuition in return for his part in the killings. She also helped Mickey place calls to the victims. Mrs. Loomis' motive for killing Sidney and her friends was revenge for Sidney killing her son. Sidney points out that if Mrs. Loomis had not abandoned Billy then he and Stu Macher would not have started their killing spree. Mrs. Loomis shoots Mickey, removing him as a potential threat and stating that his legal defense was absurd.

As Mickey is shot he shoots Gale, causing her to fall off the stage. Sidney is cornered by Mrs. Loomis and tricks her into believing Mickey is alive; when Mrs. Loomis is distracted, Sidney hits her with a prop jar. Sidney barricades herself backstage and causes the front of the stage to collapse on Mrs. Loomis. Mrs. Loomis survives and gets Sidney in an armlock, but then Cotton, the man Sidney had blamed for killing her mother arrives and takes Mickey's gun. Mrs. Loomis tries to convince Cotton to let her kill Sidney, but Cotton shoots Mrs. Loomis. Sidney and Cotton discover that Gale is wounded but alive, and help her. Mickey jumps up, and Gale and Sidney shoot him. Sidney turns around and shoots Mrs. Loomis in the head "just in case". It is revealed that Dewey survived his stabbing. He and Gale take an ambulance to the hospital. It turns out that Dewey's scar tissue from previously being stabbed in the back prevented this stabbing from being fatal. At the hospital, the news team arrives and tries to get a story on Sidney. Despite Sidney being the heroine, she tells them Cotton is the man to interview. The news team goes to him, after Cotton tells them there is a "time a place and a price" for an interview, he says, "it'll make one hell of a movie." Sidney walks off the campus, having survived the murders.

Retrieved from "https://movies.fandom.com/wiki/Scream_2?oldid=147815"
Community content is available under CC-BY-SA unless otherwise noted.