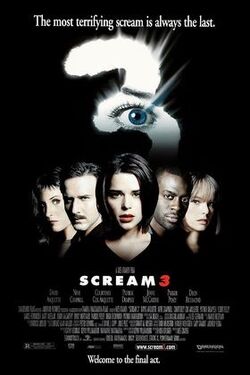 Scream 3 is a 2000 American slasher film and the third installment in the Scream franchise. Directed by Wes Craven and written by Ehren Kruger, the film stars Neve Campbell, Courteney Cox, and David Arquette. It is the sequel to Scream 2. It was released on February 4, 2000.

A murdering spree begins to happen again; this time targeted toward the orginal Woodsboro survivors and those associated with the movie-inside a-movie, Stab 3. Sydney must face the demons of her past to stop the killer.