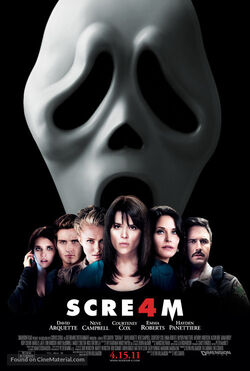 Scream 4 (stylized as SCRE4M) is a 2011 American slasher film and the fourth installment in the Scream series. Directed by Wes Craven and written by Kevin Williamson, writer of Scream and Scream 2, the film stars an ensemble cast which includes Neve Campbell, Courteney Cox, David Arquette, Emma Roberts and Hayden Panettiere. The plot involves Sidney Prescott returning to Woodsboro after ten years as part of her book tour. As soon as she arrives, Ghostface once again begins killing students from Woodsboro High, including her younger cousin's friends. Prescott, Gale Weathers-Riley, and Dewey Riley once again team up to stop the murders, but not before having to learn from a new generation the "new rules" of surviving horror films.

Originally, the series was intended to be a trilogy, but film production was approved by Bob Weinstein. Depending on the box office, Scream 4 is intended to be the first of a new trilogy. Williamson had to leave production early due to contractual obligations and Ehren Kruger (Scream 3) was brought in for re-writes. Campbell, Arquette and Cox are the only returning cast members from the previous films and were the first to sign on to the film in September 2009. Panettiere and Rory Culkin were the first of the new cast to sign on in May 2010. Ashley Greene was initially the choice of the lead character, Jill, but the role eventually went to Roberts. Filming took place in and around Ann Arbor, Michigan in June 2010 to September 2010, with re-shoots in early 2011.

Scream 4 was released on April 15, 2011, and took in $19.3 million its opening weekend in the United States and Canada, making it the second-lowest opening since the first film.