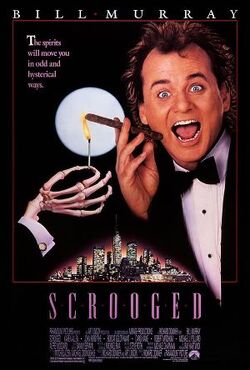 Scrooged (1988) is an American comedy modernization of Charles Dickens' classic tale, A Christmas Carol. The film was produced and directed by Richard Donner, and the screenplay was written by Mitch Glazer and Michael O'Donoghue with Danny Elfman providing the original music score.

A modern twist on Charles Dickens' classic "A Christmas Carol," this time a cynical and selfish TV executive is haunted by three spirits bearing lessons on Christmas Eve.

Retrieved from "https://movies.fandom.com/wiki/Scrooged?oldid=101359"
Community content is available under CC-BY-SA unless otherwise noted.