Moviepedia
Register
Don't have an account?
Sign In
Advertisement
in: Commons category with local link different than on Wikidata, Actors, 1970 births,
and 4 more

View src
watch 01:33
House of the Dragon Trailer - The Loop
Do you like this video?
Play Sound
Sean Hayes 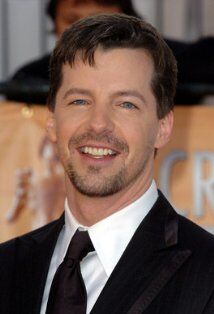 He is best known for his role as Jack McFarland on the NBC sitcom Will & Grace, for which he won an Emmy Award, four SAG Awards, and one American Comedy Award, and earned six Golden Globe nominations. He also runs a television production company called Hazy Mills Productions, which produces shows such as Grimm, Hot in Cleveland, The Soul Man, and Hollywood Game Night.

He is known for his film work in movies such as Cats & Dogs, Pieces of April, The Cat in the Hat, Win a Date with Tad Hamilton!, The Bucket List, and The Three Stooges.

He is also known for his work on Broadway such as An Act of God and Promises, Promises, where he played Chuck Baxter and received a nomination for Tony Award for Best Performance by a Leading Actor in a Musical.

Hayes was born in Chicago, Illinois to Ronald Hayes and Mary Hayes.

Hayes was an extra in the film Lucas (1986), which was filmed at his high school. He made his professional debut in the independent film Billy's Hollywood Screen Kiss (1998), which brought him wide attention. The same year, he was cast as Jack McFarland, a flamboyantly gay and frequently unemployed actor, in the NBC comedy series Will & Grace. The show became a long-running hit and Hayes' performance earned him seven consecutive Emmy Award nominations as Outstanding Supporting Actor in a Comedy Series. He won the award for his first nomination. He was also nominated for six Golden Globe Awards for his performance.

Hayes also made film appearances in Cats & Dogs (2001), as Jerry Lewis in Martin and Lewis (2002), Wayne in Pieces of April (2003), The Cat in the Hat (2003), and Win a Date With Tad Hamilton! (2004). He was also the voice of Brain in the 2008 film Igor, and has guest starred in television shows such as Scrubs and 30 Rock. In 2005, he was executive producer for Bravo's Situation: Comedy, a reality television series about sitcoms. He also executive produced The Sperm Donor and Stephen's Life, the two winning scripts that were chosen by NBC. He guest-starred in 2006 in the Adult Swim cameo-filled show Tom Goes to the Mayor.

Hayes appeared as Thomas in the film The Bucket List (2007). On July 5, 2008, he made his New York stage debut as Mr. Applegate / Devil in New York City Center's Encores! production of Damn Yankees.

He also appeared as Mr. Hank Hummerfloob and the voice of "The Fish" in The Cat in the Hat. In a 2008 New York Times interview, Hayes talked about a television project, BiCoastal, about "a guy with a wife and kids in California and a boyfriend in New York" for Showtime. He made his Broadway debut in the April 2010 Broadway revival of the musical Promises, Promises. He received a nomination for the Drama League Award for Distinguished Performance, and was nominated for a Tony Award for Best Actor in a Musical.

Hayes was host of the 64th Annual Tony Awards on June 13, 2010 on CBS. In 2010, he reprised the role of Mr. Tinkles, the evil white Persian cat, in Cats & Dogs: The Revenge of Kitty Galore. On November 15, 2010, he appeared in a satirical PSA for the repeal of Don't Ask, Don't Tell on The Daily Show with Jon Stewart. He played Larry Fine in the film The Three Stooges (2012).

Aware that his role in Will & Grace "wouldn't go on forever", Hayes teamed up with his friend Todd Milliner, whom he met at Illinois State University, to create the television production company Hazy Mills Productions in 2004. The company has produced multiple American television series, including Hot in Cleveland, Grimm, The Soul Man, Hollywood Game Night and Sean Saves the World. Hayes is co-executive producer of the TV Land original comedy series Hot in Cleveland, which premiered in June 2010. He is also a co-executive producer of the NBC series Grimm, as well as creator and executive producer on another NBC series, Hollywood Game Night.

Hayes and his husband, Scott Icenogle, produce lip-sync videos under their YouTube channel, The Kitchen Sync. They lip-synced to songs such as Trouble & Burnitup! He was the host of An All Star Tribute to James Burrows.