Start a Wiki
watch 01:48
The Loop (Movies)
Do you like this video?
Seann William Scott 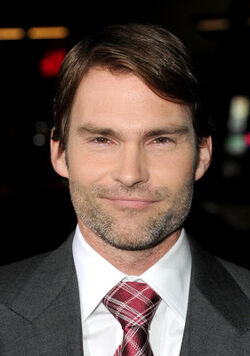 Seann William Scott (born October 3, 1976) is an American actor, comedian, and producer. He is best known in the American Pie films as Steve Stifler. Also films such as Final Destination and Dude Where's My Car? and the voice of Crash in the Ice Age franchise.

Scott, was born in Cottage Grove, Minnesota. He is the son of Patricia Anne (née Simons) and William Frank Scott, the youngest of seven children.

Scott started his film acting debut in the 1999 film American Pie, which he at first had a supporting role until the third sequel in which he had a main role. He starred in other films such as Final Destination, Dude Where's My Car?, The Rundown, The Dukes of Hazzard and Just Before I Go.

He also did voice work in the Ice Age franchise as Crash in Ice Age: The Meltdown, Ice Age: Dawn of the Dinosaurs, Ice Age: Continental Drift and the upcoming sequel Ice Age: Collision Course and as Skiff in Planet 51.

Retrieved from "https://movies.fandom.com/wiki/Seann_William_Scott?oldid=95700"
Community content is available under CC-BY-SA unless otherwise noted.