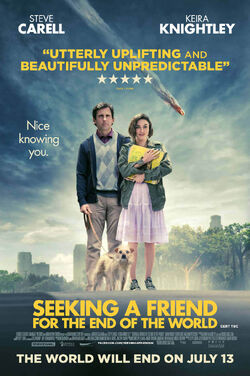 Seeking a Friend for the End of the World is a 2012 dark comedy film written and directed by Lorene Scafaria. The film stars Steve Carell and Keira Knightley.

An asteroid named "Matilda" is on a collision course towards Earth and in three weeks the world will come to an absolute end. What would you do if your life and the world were doomed? One man decides to spend his time searching for his long lost love from high school during the coming catastrophe.

Retrieved from "https://movies.fandom.com/wiki/Seeking_a_Friend_for_the_End_of_the_World?oldid=175229"
Community content is available under CC-BY-SA unless otherwise noted.