Start a Wiki
watch 01:27
The Loop (Movies)
Do you like this video?
Sense and Sensibility 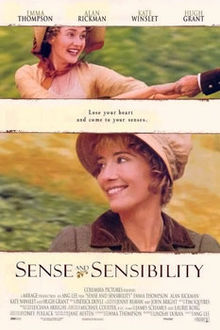 Sense and Sensibility is a 1995 British period drama film directed by Taiwanese-American director Ang Lee. The screenplay by Emma Thompson is based on the 1811 novel of the same name by English author Jane Austen. The film stars Thompson and Kate Winslet as the two eldest Dashwood sisters, while actors Hugh Grant and Alan Rickman play their respective suitors.

Thompson earned her second Academy Award, this time for Best Adapted Screenplay, making her the only person, as of 2011, to have won a writing Oscar and an acting Oscar (Thompson won the Best Actress award for Howards End, in 1993).

Retrieved from "https://movies.fandom.com/wiki/Sense_and_Sensibility_(film)?oldid=117399"
Community content is available under CC-BY-SA unless otherwise noted.