watch 00:59
The Loop (Movies)
Do you like this video?
Serpico 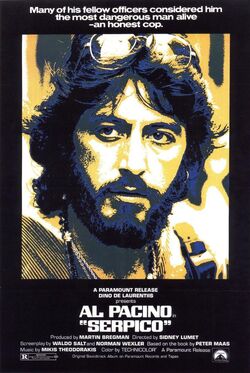 The film and principals were nominated for numerous awards, earning recognition for its score, direction, screenplay, and Pacino's performance. The film was also a commercial success.

Working as a uniformed patrolman, Frank Serpico excels at every assignment. He moves on to plainclothes assignments, where he slowly discovers a hidden world of corruption and graft among his own colleagues. After witnessing cops commit violence, take payoffs, and other forms of police corruption, Serpico decides to expose what he has seen, but is harassed and threatened by his peers. His struggle leads to infighting within the police force, problems in his personal relationships, and his life being threatened. Finally, after being shot in the face during a drug bust on February 3, 1971, he testifies before the Knapp Commission, a government inquiry into NYPD police corruption between 1970 and 1972. After receiving a New York City Police Department Medal of Honor and a disability pension, Serpico resigns from the force and moves to Switzerland

Prior to any work on the film, producer Martin Bregman had lunch with Peter Maas to discuss a film adaptation of his biography of Frank Serpico. Waldo Salt, a screenwriter, began to write the script, which director Sidney Lumet deemed to be too long. Another screenwriter, Norman Wexler, did the structural work followed by play lines.

Director John G. Avildsen was originally slated to direct the movie, but was removed from production due to differences with producer Bregman. Lumet took the helm as director just before filming.

The story was filmed in New York City. A total of 104 different locations in four of the five boroughs of the city (all except Staten Island) were used. An apartment at 5-7 Minetta Street in Manhattan's Greenwich Village was used as Serpico's residence, though he lived on Perry Street during the events depicted in the film. Lewisohn Stadium, which was closed at the time of filming, was used for one scene.

Serpico was a major commercial success, given the times and its modest budget, which ranged from $2.5 million to $3 million. It grossed $29.8 million at the domestic box office, making it the 12th highest-grossing film of 1973.

Serpico was released on VHS and is available on Region 1 DVD since 2002 and Region 1 Blu-ray since 2013. The Masters of Cinema label have released the film in a Region B Blu-ray on 24 February 2014 in the United Kingdom. This version contains three video documentaries about the film, as well as a photo gallery with an audio commentary by director Sidney Lumet and a 44-page booklet.

Retrieved from "https://movies.fandom.com/wiki/Serpico?oldid=297082"
Community content is available under CC-BY-SA unless otherwise noted.