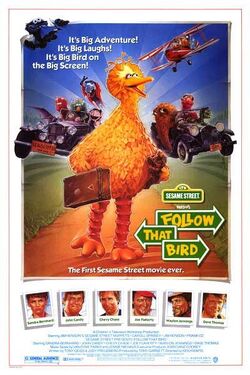 Sesame Street Presents: Follow That Bird (commonly shortened to Follow That Bird) is a 1985 American children's road film, directed by Ken Kwapis, starring many Sesame Street characters (both puppets and live actors). This was the first of two Sesame Street feature films, followed in 1999 by The Adventures of Elmo in Grouchland. The film was produced by Sesame Workshop, which was called chlidren's television workshop at the time The Jim Henson Company and Warner Bros and filmed in Toronto, Ontario, Canada at the Toronto International Studios, and on location in the Greater Toronto Area.

Big Bird is sent to the fictional town of Oceanview, Illinois, to live with a family of dodos by Miss Finch (performed by Cheryl Wagner and voiced by Sally Kellerman), a social worker who thinks he needs to be with his own kind upon being sent to him by the feathered friends. The Dodos think exactly the same, even saying he should have a bird as a best friend instead of Mr. Snuffleupagus. This causes him much distress.

When Big Bird runs away from his new home and ends up on the news, Miss Finch tells Kermit the Frog that she will reclaim him. His friends back on Sesame Street also see the news and band together to find him and Telly becomes extremely worried. In a Volkswagen Beetle is the group of Gordon, Olivia, Linda, and Cookie Monster. Count von Count departs in his Countmobile. Bert and Ernie go out to search in an airplane. Grover flies as Super Grover (later falling into the Volkswagen). Maria, much to her dismay, has to ride with Oscar the Grouch, Telly Monster, and Homer Honker in Oscar's Sloppy Jalopy. They all head out across America in search for their beloved Big Bird. Oscar, however, decides to go his own route wanting to have some fun, which greatly annoys Maria and Telly.

Big Bird has various adventures in his attempt to get home. First, he hitches a ride with a turkey truck driver (Waylon Jennings) who tells him not to give up trying to get to his goal. He then meets two kids named Ruthie and Floyd (Alyson Court and Benjamin Barrett) at a farm and stays with them for a while. He ends up having to leave there because of Miss Finch's arrival.

While out imagining his friends in a cornfield, Big Bird is spotted by Ernie and Bert in their plane. But he doesn't know that they are in it and thinks it's Miss Finch wanting to take him back to the Dodos. When Ernie steers it toward him, Big Bird flees in fright. Ernie turns it upside down to get Big Bird's attention and begins singing "Upside Down World", with Bert beginning to join in, but when they turn it back up, Big Bird is gone, and Ernie blames it all on Bert.

Big Bird is also sought by two scam artists named Sam and Sid Sleaze (Dave Thomas and Joe Flaherty) who operate a lousy carnival called the Sleaze Brothers Funfair. They want to capture him to put him on display. Eventually, he arrives in Toadstool (dubbed "The Mushroom City"), Indiana. Shortly after arriving, Miss Finch finds him there and gives chase through. On the outskirts of Toadstool, the Sleaze Brothers have set up their carnival, and Big Bird shows up asking if they have a place to hide him from Miss Finch. They then put him in their "hiding cage." Shortly afterwards, they decide to paint him blue and tout him as "The Bluebird of Happiness." However, his performance is not one of happiness but of sadness as he sings a song about wishing to be back home with his friends. However, he brings in a lot of customers as Sam is seen backstage during the performance happily counting the pile of cash that's been brought in by the many customers that Big Bird has attracted. Sid and Sam are excited because this is only the beginning. They can tell that he is going to make them rich!

After the show, two kids sneak backstage to see him. Upon noticing them, he asks them to call Sesame Street to tell his friends where he is. They do so and the next day, his friends sneak into the circus tent to try to free him. However, the Sleaze Brothers quietly wake up because Cookie Monster gets crazy by some nearby cookies and Grover also tried to bend the cage bars. They strap the cage to their truck and and attempt to drive off with him in tow. Eventually, Gordon and Olivia give chase and succeed in rescuing him from the truck. Shortly afterwards, the Sleaze Brothers are pulled over by a police officer (John Candy) and his young sidekick, and arrested on charges of counterfeiting, extortion, fraud, impersonating a dentist, and even stealing a kid's apple at their carnival (as seen earlier in the film).

Back on Sesame Street, Big Bird is happy to be back home but then looks on as Miss Finch arrives to announce that she has found another bird family for him. Maria convinces her that he can be, and is, happy there on Sesame Street—that it does not make any difference that his family consists of humans, monsters, cows, Grouches, Honkers, and the other varieties of eclectic species. What matters is that they are family. After considering what she's heard and realizing how far his friends went to try to bring him back, Miss Finch declares that Sesame Street is his home. He is also reunited with Snuffy, who watched his nest while he was away. Gordon brings the Volkswagen (which was partially eaten by Cookie Monster) to Luis to see if he can fix it. As Sesame Street goes back to normal, Oscar is carried around the block in his can by Bruno the Trashman in order to get the happiness of Big Bird being back on Sesame Street out of him.

At the beginning of the end credits, the Count begins to count the movie credits (in a nod to the original series, he calls Joan Ganz Cooney, the co-creator of Sesame Street, "mom" when her name is credited as one of the executive producers). By the end of the credits in a brief "bonus scene" he announces 278 credits and does his trademark laugh accompanied by a thunderclap (no lightning flash was present as was in his usual running gag).

Retrieved from "https://movies.fandom.com/wiki/Sesame_Street_Presents:_Follow_That_Bird?oldid=293099"
Community content is available under CC-BY-SA unless otherwise noted.