Start a Wiki
watch 01:38
The Loop (Movies)
Do you like this video?
Seven in Heaven 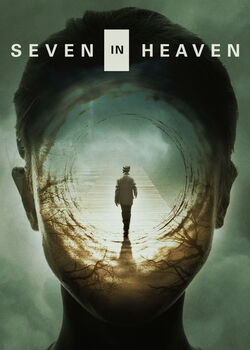 Seven in Heaven is a 2018 American supernatural horror film written and directed by Chris Eigeman. It stars Travis Tope and Haley Ramm. Jason Blum is serving as a producer through his Blumhouse Productions banner. The film was released on October 5, 2018 by Universal Pictures.

Quiet and nerdy Jude attends a party at his friend David's home with his friend Kent. He spends the time waiting for his girlfriend Nell and being bullied by Derek and June. Bored, he and Kent wander the empty house. In the master bedroom closet he finds a deck of playing cards with photos of nude women on them. One catches his attention, he is positive the woman in the photo is his mother. Derek, June, and other kids enter the large empty closet. Derek begins a game of 'Seven in Heaven', with winning cards sending Jude and June to sit for seven minutes in a just discovered secret closet. While waiting June offers to fool around with Jude, despite them both having significant others.

Upon exiting the closet they discover they have travelled to an alternate reality, more violent and dangerous than home. Jude and June are quickly separated by the rowdy party, Jude being beaten up by a crowd in the closet and June running away to get a drink. Jude escapes and heads home, where he is attacked by his father, who in his reality is dead. His parents reveal he has been accused of murdering his acquaintance Derek. When he runs to his bedroom he finds that this dimension's version of himself is dark and violent. His bedroom is adorned with heavy metal posters, goth clothing, and disturbing photos. As the police are looking for him he escapes out his bedroom window. He is soon found by his guidance counselor, Mr. Wallace, who is oddly informed about this dimension and that Jude does not belong there. He punches Jude, and at first tries to put him in the trunk of his car. When Jude does not fit, he instead shoves him into his back seat. He directs Jude to leave the dimension as soon as possible through the closet he came from, dropping him off at David's home. Jude sneaks past David and his parent to the master bedroom and enters the closet, where he sets a timer for seven minutes. While waiting he retrieves a pencil from his pocket and scratches 'GET ME HOME' above the door. When he exits the closet again he discovers he is still trapped in the alternate dimension. He decides to look for June in the hope that if they try leaving through the closet together they will return home.

He finds June's address and is tackled by her outside her home. She was hiding in a tree from men that attacked her after she left the closet. Jude explains they are in another dimension but June does not believe him. He suggests she look around her home for proof, where she finds family photos she does not remember taking, and her sister, who in her dimension is at boarding school, in her bedroom. Her sister attacks her and attempts to smother her to death with a pillow. Jude hears the struggling and bursts into the room, separating the sisters. He and June run outside, hiding from passing cars as they try to come up with a plan to get home. Mr. Wallace drives by them, and again stops to help. Jude and June at first hide from him, but a phone call from Jude's mother alerts him to their presence. He directs them again to try the closet a second time now that they are back together. Jude states he cannot access Davids house since the police are searching for him. Mr. Wallace drives them to David's home and somehow is able to convince the police, David, and David's parents, to let Jude and June in and to the closet. They enter again, and while they wait have sex for three minutes. In the remaining four minutes Jude comments that it was his first time, and is unsure if he performed well. June responds that it was not her first time, and he did fine.

In their home reality Jude and June's friends have opened the closet and discovered it empty. The house is searched for them but no one can explain how they disappeared. Kent and Derek try calling them but both numbers have an out of service recording. The party continues during this, including the arrival of the police due to a noise disturbance call. David reassures the police they will be quiet and the officer leaves. Nell arrives and is told by Kent that Jude and June are missing. Kent sits in the closet for seven minutes and has a vision of Jude being beaten up. He realizes that Jude and June are not in their dimension anymore and are in trouble. He convinces Nell to sit in the closet as well, but she only has a small vision of Jude and June in the closet, hearing June offer for Jude to touch her. She does not believe that they have disappeared. The police return to David's house because of another noise complaint. They ask to come in, Kent refuses as they do not have a warrant. The police sit outside, frustrated they have no legal way to enter the home. Inside, David, Kent, and the rest of the party begin cleaning up the mess they created. Kent warns everyone not to leave, or they will be arrested and their parents called. A few younger teenagers sneak out the back and are promptly arrested, proving Kent's point. The police resort to calling the parents of several students. As parents arrive they demand their children come outside, threatening various punishments. The teenagers still refuse, quietly attempting to wait out the police and their parents.

In the alternate dimension, Jude and June have waited inside the closet again for seven minutes. Opening the door they find David's house completely empty and quiet. Jude and June begin to walk home. Jude's mom calls him, asking where he is. She tells him she tried to pick him up from the party but no one was there. He asks where everyone is but she replies that it is late and that he come straight home. Suddenly a car appears behind them. Recognizing the car as Mr. Wallace, the car revs and speeds towards them as they try to run away. Eventually they escape, but are lost, unable to find David's house, wandering various empty streets. They realize they are in a new, different dimension. Jude receives a call from Nell, who tells him to come to Kent's house. Kent's home is dark and seemingly empty. Following a dim light they walk through a kitchen and to a set of stairs leading down. Suddenly Kent, Nell, Derek, and other classmates appear. Derek says they will play another game, similar to Truth or Dare, called Lie or Die. June says that Jude never touched her as they are led into an auditorium. Everyone in seated as a projector screen shows June's sister. She is then smothered to death by a pillow since June lied about what happened in the closet between her and Jude. Then Jude told them a truth that his dad died from a car accident, then he is shown on the screen that deer rammed in on the driver side. The questions continue, a scared and angry Jude flips the game on the crowd. He and June end up asking the crowd questions, the game working in their favour. The crowd gets angry and charges at them, as they escape through a back door and eventually out back into the street. They are found again by Mr. Wallace, and convince him to take them back to the house to escape through the closet. Mr. Wallace explains that this dimension is where everyone's worst thoughts take over. The crowd continues to follow them as they speed toward the house and Jude concocts a plan to help them get home.

In their home dimension, David and the rest of the party watch from the windows as a crowd of parents and police wait. David's grandmother arrives with a spare key to enter the house. She unlocks the door, inviting everyone in as she leaves.

In the alternate dimension, Jude and June are escaping into the house while Mr. Wallace helps them by burning down the house to "reset" the game. The angry crowd is stopped outside, watching as the house burns. Jude explains how the house burning will help them get home, convincing June that they will get home. They struggle to breathe in the smoke filled room as the clock counts down.

Back home, the police are releasing each kid to their parents. It is light outside. Jude and June's parents wait outside, worried about their missing children. Jude and June carefully leave the closet, discovering the house empty and daylight outside. On the lawn the crowd of teenagers, parents, and police stare at them as they walk hand in hand. Jude asks for the crowd to give them a few moments of silence, during which he exclaims that he did not kill Derek, as well as asking Kent if they are friends. They discover they are home, and that their friends have been searching for them all night. Mr. Wallace arrives and welcomes them home. Unbeknownst to everyone, Derek has gone inside and entered the closet. A police officer goes inside to search for him. Derek is shown in the closet having visions of June and Jude making love, followed by Jude stabbing him in the shoulder. The officer opens the secret closet as the light bulb burns out, finding it empty except for the bloody pencil Jude had dropped there. This ironically creates the implication that Jude will once again occupy a reality where he is suspected to have killed Derek.

In July 2017, Blumhouse Productions started filming Seven in Heaven with Travis Tope and Haley Ramm starring in the film. In April 2018, the film entered the post-production phase.

Principal photography on the film began in July 2017.

Retrieved from "https://movies.fandom.com/wiki/Seven_in_Heaven?oldid=155335"
Community content is available under CC-BY-SA unless otherwise noted.