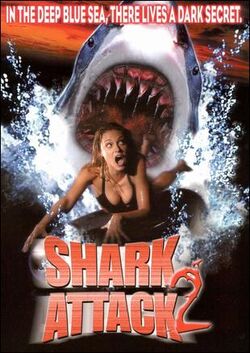 Shark Attack 2 is a 2001 direct-to-video horror film. This is the sequel to the 1999 horror film Shark Attack. It is directed by David Worth and starring Thorsten Kaye, Nikita Ager and Dan Metcalfe.

The mutant sharks from Dr. Craven's experiments in "Shark Attack" are back, this time choosing Cape Town, South Africa as their hunting ground. Two sisters, Amy and Samantha, while diving near a wreck in the reef are attacked by a shark; Samantha survives. One week later, Dr. Nick Harris and his assistant get the shark and install it as a new attraction at Water World - a Sea World rip-off. When the shark escapes, Nick and Samantha go to hunt it and discover that there are 6 mutant Great Whites living in a cave near the beach, and the Water World's surfing competition might be the next victim! Now they team up with Roy - a Discovery Channel shark hunter - to kill the beasts and save Cape Town.

Retrieved from "https://movies.fandom.com/wiki/Shark_Attack_2?oldid=119655"
Community content is available under CC-BY-SA unless otherwise noted.