View src
watch 01:33
House of the Dragon Trailer - The Loop
Do you like this video?
Play Sound
Sharknado 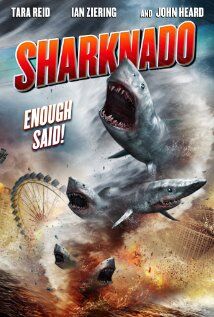 Off the coast of Mexico, the ship of shark fin smuggler Carlos Santiago is caught in a cyclone, interrupting his meeting with a potential buyer. A tornado throws swarms of sharks onto the boat, killing all aboard.

The cyclone soon hits Los Angeles, flooding the city with shark-infested seawater. Bar owner and surfer Fin sets out with his friends, Baz, Nova, and George, to rescue his estranged wife, April, and their teenage daughter, Claudia, after the bar and boardwalk are destroyed by the flooding. While heading to April's home, the group stops on a freeway to save people as flooding causes sharks to attack. George is killed and the group learns of a tornado warning. They arrive at April's house just before the first floor is flooded and shark-infested. Collin, April's boyfriend, is eaten by sharks, but the rest of the group escapes unharmed from the house, which gets hit by a huge wave causing it to collapse.

As they travel, the group comes across a school bus trapped in the floodwaters and surrounded by sharks. Fin stops to save the children and bus driver by rappelling down to the bus from a bridge. Afterwards, the bus driver is killed by a letter in the Hollywood Sign. While Nova is driving the car, a shark lands on top of the car and rips the roof off. Fin's hand is cut and the group abandons the car before it explodes. They steal another car and meet up with Fin and April's son Matt, who is found taking shelter at his flight school. Three tornadoes develop and absorb the floodwater, turning into shark-filled "sharknados". The group borrow equipment from nearby storage and Matt and Nova become attracted to each other. Matt and Nova decide to stop the threat of the incoming sharknados by tossing bombs into them from a helicopter. Two are destroyed, but they are unable to stop the third one.

As Nova fights off a shark that had latched onto the helicopter, she falls out of the helicopter and directly into another shark's mouth. Matt is heartbroken. Baz is also lost in the storm along with Matt's friends Bobby and Luellyn. Ultimately, Fin destroys the last sharknado with a bomb attached to his car and the sharks begin to plummet toward the ground. One falling shark flies directly toward the remaining members of the group. Fin jumps into its mouth with a chainsaw and cuts his way out. He emerges carrying an unconscious but otherwise unharmed Nova. Matt is reunited with Nova, and Fin gets back together with April.