View src
watch 01:33
House of the Dragon Trailer - The Loop
Do you like this video?
Play Sound
Sharknado: The 4th Awakens 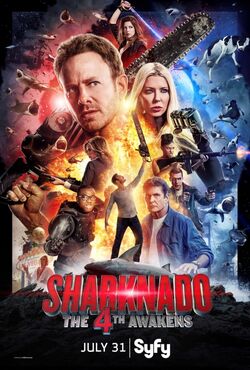 Sharknado: The 4th Awakens is a 2016 American made-for-television sci-fi comedy disaster film directed by Anthony C. Ferrante. The cast of the film consists of Ian Ziering, Tara Reid, Masiela Lusha, Ryan Newman, Tommy Davidson, and David Hasselhoff. The film serves as a sequel to Sharknado, Sharknado 2: The Second One, and Sharknado 3: Oh Hell No!.

In the five years since the previous film, Fin has moved to a farm in Kansas named "April's Acres," where he lives with his mother Raye and young son Gil. April is believed dead after being crushed by the wreckage of the space shuttle. Tech mogul Aston Reynolds (based on Tesla, Inc. co-founder and SpaceX founder Elon Musk) has developed a new type of high-speed space travel with his company Astro-X (a play on SpaceX), which was used to save Fin's father, Colonel Gilbert Shepard, from the moon. Astro-X has also developed a technology that is capable of using radio waves to diffuse tornadoes, leading to the end of the sharknado phenomenon.

Fin travels to Molong with his cousin Gemini to meet up with his son Matt, who has returned from deployment in Iraq. Meanwhile, Reynolds has built and is opening a shark-themed hotel featuring a giant tank of sharks. While Matt and his fiancée, Gabrielle, marry and skydive from a plane, a sandstorm tornado develops that cannot be diffused by Astro-X. The tornado absorbs the water and sharks from Reynolds' hotel, creating the first sharknado in five years. The streets of Las Vegas flood, but Fin, Gemini, Gabrielle, and Matt work together to survive the storm until it heads back out into the desert.

Since returning from the moon, Col. Shepard has become an employee of Astro-X, working on the development of a weaponized mech suit with the aid of his granddaughter Claudia in San Francisco as well as April's father Wilford, a scientist. However, he is unaware that Wilford has reconstructed April into a cyborg to save her life, and told her that Fin and their family were killed by the shuttle debris to keep her at his laboratory. Fin, Gabrielle, Gemini, and Matt decide to take a train back to Kansas, only for the sharknado to follow the train after destroying the Hoover Dam. Astro-X blows up the Grand Canyon to stop the resulting flood, but as an accidental result the sharknado picks up stones to become a "bouldernado." The train ends up in Arizona, where Fin meets Aston Reynolds at Astro-X. Fin's group ends up in a small town in Texas, where they acquire chainsaws and construction gear to fight off the sharknado, which hits an oil field and transforms into an "oilnado" and then ignites into a "firenado". Meanwhile, two other sharknadoes develop, one near San Francisco that heads north and become a "hailnado," and the other near Yellowstone National Park that quickly transforms into a "lavanado."

At the Kansas State Line, Fin, Gemini, Gabrielle, and Matt pick up a red-and-white self-driving car that is a 1958 Plymouth Belvedere named Christine from Fin's friend, Colton, and reach April's Acres just before the sharknado - which has now picked up cows and become a "cownado" - strikes and Gabrielle is killed, to Matt's devastation. The house is picked up by the tornado and thrown all the way to Chicago, where it lands on the mayor. Elsewhere, April - who has learned of her family's survival and left Wilford's lab after angrily confronting him - saves Col. Shepard and Claudia from the hailnado in San Francisco. Later, Reynolds brings the three of them to Fin, Gemini, Matt and Gil, reuniting April with Fin and allowing her to introduce herself to Gil for the first time.

Reynolds informs the group that Astro-X has developed a way to alter their beacon pods in order to shut down the new sharknadoes. This method works on the hailnado and lavanado, but the cownado has since evolved further into a "lightningnado," and its electricity blocks their attempts. The situation further worsens when the lightningnado strikes a nuclear power plant (the Perry Nuclear Power Plant) in Ohio, transforming it into a deadly "nukenado" filled with radioactive sharks. Reynolds realizes that the only way to stop the nukenado from destroying everything in its path is to transform it back into a regular sharknado so Astro-X's pods will work on it, and the engines of Col. Shepard's mech suit can be used to power a device to remove the radioactivity from the storm by drawing massive amounts of water into it. Fin realizes that the only location with enough water to work is Niagara Falls, so they travel there with the nukenado following them.

At Niagara Falls, Reynolds volunteers to jump near the falls with a squirrel suit to set off the device, which will reverse the water flow upward into the nukenado and cool it. However, the device does not have enough power, and Reynolds falls off a cliff. Col. Shepard volunteers to pilot the mech suit to complete the plan, but is swallowed by a shark before he can put it on. Fin puts on the suit and flies into the storm alongside April - who can fly and shoot laser beams from her hands - to fight through and reach the device. Claudia and Matt are also swallowed by sharks. Fin manages to use the suit's power supply to activate the device, but he is electrocuted in the process and bitten in the chest by a shark. Niagara Falls is reversed into the nukenado, neutralizing its radiation and rendering it a normal sharknado again. The Astro-X technicians activate the pods, destroying the storm. However, Fin becomes unconscious and falls over the cliff and is swallowed by a shark, which is promptly swallowed by three more sharks and a blue whale in quick succession. Gil, having survived by going over Niagara Falls in a barrel, pulls his own small chainsaw out of a stone and cuts open and enters the whale, where he cuts open the sharks to reveal Col. Shepard, Matt and Claudia all alive. Together they pull Fin out, but he has no pulse. April and Colonel Shepard use CPR on the unconscious Fin. Using her power supply and two sharks to create an improvised defibrillator, April manages to revive him.

Just as the Shepard family rejoices, the Eiffel Tower falls from the sky, having been blown all the way from France. Nova, who was earlier mentioned to have been vacationing in Paris, emerges from the wrecked structure, causing the Shepards to realize that the sharknado crisis is not only not over, but may now be a global problem.

In a post-credits scene, Reynolds is revealed to have survived.