Sharknado 2: The Second One

View src
watch 01:33
Wiki Targeted (Entertainment)
Do you like this video?
Play Sound
Sharknado 2: The Second One 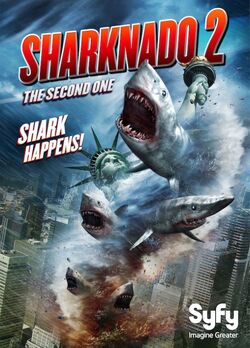 Sharknado 2: The Second One is a 2014 American made-for-television sci-fi comedy disaster film directed by Anthony C. Ferrante. The cast of the film consists of Ian Ziering, Tara Reid, Vivica A. Fox, Mark McGrath, and Kari Wuhrer. It serves as a sequel to the 2013 film Sharknado.

Fin Shepard, and his ex-wife, April Wexler, are traveling to New York City to promote How to Survive a Sharknado and Other Unnatural Disasters, a book April has written about the Los Angeles sharknado. As the plane comes in for a landing through a storm, it is battered by airborne sharks, losing an engine. Sharks enter the plane, killing passengers and the crew, including both pilots. While Fin lands the plane, April's hand is severed while she attempts to shoot a shark with an air marshal's handgun.

Fin's sister, Ellen Brody, is sightseeing in New York with her family. Her husband, Martin, a childhood friend of Fin's, takes their son, Vaughn, to a Mets game at Citi Field along with Martin's and Fin's friends Skye and Brian. Ellen takes their daughter, Mora, to the Statue of Liberty, where she meets with her friends, Polly and Chrissie, who tell her about Fin's recent appearance.

At the airport, Fin tries to warn the crowd of the impending storm, only for no one to take him seriously. After leaving April to the hospital for surgery, Fin is able to contact Ellen, and tells her to get to the Bales Tower Hotel on Manhattan as soon as possible. He agrees to retrieve Martin and Vaughn from the ball game, hiring a cabbie, Ben, in the process. At Citi Field, Skye surprises Fin with a kiss, but Fin explains that he and April are back together. The game is cancelled because of the storm, but when sharks start falling from the sky and killing people, Fin and his group improvise weapons to fight them and go to the subway.

On the ferry ride back to Manhattan, a shark kills Chrissie. The remaining three women flee from the severed head of the Statue of Liberty. Meanwhile, the subway tunnels flood, sending sharks to break into the train's rear cabin and kill Brian. Ben, who anticipated Fin's escape, takes Fin and the others to shops in search of weapons and items to make explosives. When the taxi is caught in a flood, Fin forms a rope swing to take Skye, Vaughn, and Martin to safety. When Ben is killed in his attempt and the rope falls away, Fin uses the top of the sharks as stepping stones to reach the others.

Two sharknadoes are converging into a more powerful storm directly above the hotel. Fin and Skye head to the roof to try to bomb the sharknadoes. Polly is flattened by a whale shark, but Ellen and Mora reach the hotel, and reunite with Martin and Vaughn. Fin and Skye sling bombs into the tornadoes, but as the storm system is too cold; only a few sharks are knocked down, and they are forced to flee down a fire exit stairwell. They meet the Brodys, who were fleeing up the stairwell that is flooding with sharks. They break down a door to escape the stairwell and leave the building.

April flees the hospital, taking a fire truck to meet Fin and the others. At the Empire State Building, a third tornado is expected to merge with the other two. Fin plans to detonate a tank of Freon at the top of the building by connecting it to the structure's lightning rod to halt the storm. He rallies a crowd of New Yorkers, including the mayor and his task force, to battle the sharks. As he and Skye implement the plan, April, who has affixed a circular saw to her stump, arrives and saves Fin from a falling shark. Skye sacrifices herself to help connect the cables; the Freon explosion throws them in the air where sharks rip Skye in half. While in the twister, Fin grabs onto and rides a great white shark using chains, eventually impaling it on the building's antenna. He reunites with April and finds her lost arm in one of the fallen sharks, using the handgun to kill another one. He then takes the wedding ring from April's severed hand and uses it to propose remarriage, and she accepts.