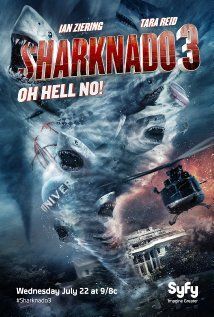 While sharknado fighter Fin Shepard is in Washington, D.C. to receive a Presidential Medal of Freedom from the president, another sharknado strikes, devastating the nation's capital. Fin and the president work together to defeat the sharks, and the storm unexpectedly subsides. Fearing that April, who is at Universal Orlando with their daughter Claudia and her mother May, is in danger, Fin heads for Florida. On his way there, he encounters a "fognado", which is stopped by Nova Clarke, his former employee, who has become a hardened sharknado storm tracker, and her partner Lucas Stevens.

They stop at a military airport where they get clearance to use a fighter jet to bomb other forming sharknados. Lucas sacrifices himself to blow up a sharknado so that Nova and Fin can escape. They detonate a bomb in a sharknado over the Coke Zero Sugar 400 race. After crash landing in Orlando at the Universal Orlando Resort, they begin to search for the rest of the family. They are not able to get in touch with Claudia since she left her phone behind earlier, but April retrieves it from one of the ride managers who held on to it. Eventually, Fin and Nova reunite with April, Claudia, her new boyfriend Billy, and May who have survived the sharknado that has hit the theme park. They then rush to take cover inside the Universal Orlando globe, which rolls around admist chaotic fleeing crowds before coming to rest atop Pharos Lighthouse.

Realizing that the numerous storms will soon combine into a massive sharknado wall that will destroy the entire East Coast (dubbed the "Feast Coast" by the media), Fin calls in a favor from his estranged father, former NASA colonel Gil Shepard, to help him with a risky plan to destroy the storm from space. Gil, Fin, April, and Nova reach Cape Canaveral where they plan to use a top-secret Space Shuttle to blow up tanks of rocket fuel in the storm. They head inside to prepare, while Claudia and Billy fend off incoming sharks by using guns. They share a kiss and begin to head back inside, but Billy is killed when a shark lands on him. While Nova clears a path, Gil, Fin, and April launch into space where they detonate the external tank, but it fails to stop the wall of sharknados. Gil deploys "Plan B", activating a Reagan-era Strategic Defense Initiative satellite laser weapon, stranding himself in space since there is not enough fuel to propel all of them back to Earth. This time, the sharknados are destroyed, but the beam causes the sharks to propel into space, attacking the shuttle. Fin fights them off using an energy-beam chainsaw; he and April are eaten by two different sharks which fall back down to Earth. Though the sharks are charred from atmospheric entry, Fin emerges from his shark unharmed and discovers that April also safely returned the same way, and that she had given birth during the descent. As the family and Nova reunite, Fin names his newborn son after his father, who has landed on the moon. April is about to recover Fin's father's badge when a Shuttle fragment apparently crushes her.