watch 01:12
The Loop (Movies)
Do you like this video?
Sharknado 5: Global Swarming 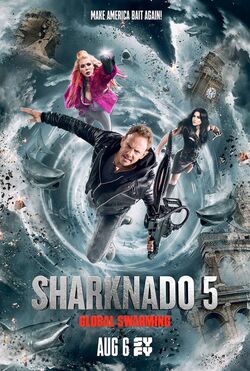 Following the events of the previous film, Fin and April travel to London with their young son Gil to attend a NATO meeting regarding the escalating sharknado threat. Meanwhile, Nova and her assistants investigate a temple hidden beneath Stonehenge, and Nova summons Fin to aid her. They discover a shrine dedicated to an ancient shark god and collect an artifact, which has the unforeseen consequence of unleashing a new type of sharknado with a dimensional vortex inside it. The sharknado heads toward London, and Fin rallies the Buckingham Palace guards to defeat it. They manage to survive the sharknado, but Gil is pulled into the storm and vanishes.

Fin, April and Nova realize that Gil is still alive and track him using a signal emitted by a special helmet given to him earlier by British scientists. They board an airship created and piloted by inventor Dr. Angel and pursue Gil to Switzerland, but the ship is caught in a sharknado and crashes, killing Dr. Angel while Fin's group steal skis and battle the sharknado as they head down the slopes. Eventually, they are engulfed by the sharknado and teleported to Sydney, Australia through the vortex, where April's cybernetic body is badly damaged in a shark attack. Nova brings April to her allies Orion and Electra for repairs, then reveals to Fin that she leads the "Sharknado Sisterhood," a global organization dedicated to destroying the sharknados. Orion and Electra are members of the Sisterhood, as is Fin's cousin Gemini, who is supervising the ship carrying the nuclear waste left behind from the nukenado at Niagara Falls. Fin is angered that Nova kept Gemini's role in the group a secret and sets out with the upgraded April to pursue Gil. Meanwhile, a sharknado strikes Gemini's ship and absorbs the nuclear waste, causing it to mutate into a shark-shaped mass of sharks that begins heading toward Japan.

Fin and April end up in Rio de Janeiro, where they meet another member of the Sisterhood at an old church and learn the ancient myths behind the sharknados and the vortex, being told that "the Earth has many portals." An art thief steals the artifact during the meeting, leading to a car chase that ends up in the Colosseum in Rome, Italy when a sharknado teleports both vehicles. Fin and April recover the artifact and are summoned by the Pope, who encourages Fin to continue his mission to save Gil and the world and supplies him with a special chainsaw for the fight to come. Using the artifact, Fin and April summon a sharknado and nearly manage to recover Gil, but he slips out of their grasp and all three are pulled into the vortex.

Fin and April emerge in Tokyo, where the nuclear mass of sharks - now dubbed "Sharkzilla" by the global media - is rampaging. They discover that Gil is trapped inside Sharkzilla's mass, and Nova arrives with the remaining members of the Sisterhood to defeat the creature. Nova skydives into Sharkzilla and begins fighting her way to Gil, but when military fighter jets bomb the mass, it explodes. Gil vanishes, seemingly killed in the blast, while Nova is mortally wounded and dies after Fin forgives her and accepts her as part of their family. Shortly thereafter, Fin receives a call from his son Matt, who frantically tells him that all the members of their family are dead before he is killed himself by a sharknado striking the family farm in Kansas. Distraught, but with nothing else left to lose, Fin and April decide to try returning the artifact to Stonehenge in the hopes that doing so will stop the escalating sharknado outbreak.

However, the sharknado they summon instead teleports them to the Pyramids of Giza in Egypt, where they find hierogylphs indicating that the Egyptians also knew of the shark god and the vortex, which is inside the Earth's core. Fin and April discover an ancient mechanism that causes the pyramids to open up and absorb the energy of the vortex upon its activation, seemingly ending the outbreak. Just as everything seems to be back to normal, however, the mechanism reverses and the vortex energy erupts from the Earth, triggering a global sharknado that consumes the entire world. Unable to shut down the device, Fin and April rush outside to discover a sharknado and tsunami heading towards them. While Fin protects their position using the staff he found in the pyramid, April uses her ability to absorb energy to absorb the entire planetary vortex, sacrificing herself to end the global sharknado. Her actions stop the storm but cause her body to explode, and Fin is left as seemingly the last human on Earth, with all life having seemingly been wiped out.

Fin collects April's head in a bag attached to the staff and begins wandering the ruined planet in a desperate but fruitless search for other survivors. Sometime later, a truck emerges from a bright light and approaches him, driven by a greatly aged Gil, who still possesses his flight insignia and the helmet that protected him from the sharks. When Sharkzilla exploded, it caused a reaction that sent him back in time, and Gil spent all the time since then developing a way to use the sharknado as a time machine. Reunited, Fin and Gil set off into the past in order to defeat the sharknados once and for all and save their family and friends.

Retrieved from "https://movies.fandom.com/wiki/Sharknado_5:_Global_Swarming?oldid=176941"
Community content is available under CC-BY-SA unless otherwise noted.