watch 00:59
The Loop (Movies)
Do you like this video?
Shaun the Sheep Movie 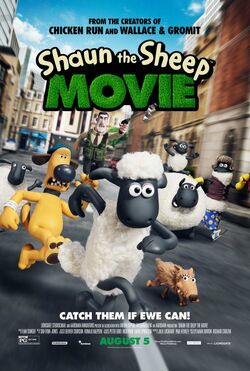 Shaun the Sheep Movie (also: Shaun the Sheep: The Movie) (2015) is a British stop-motion animated adventure comedy film produced by Aardman Animations, based on the television series of the same name. The film is written and directed by Richard Starzak and Mark Burton. This film was released in the United Kingdom February 6, 2015, and August 5, 2015 in the United States. The film was nominated to The 88th Academy Awards for Best Animated Feature.

The film opens with a montage, set to Tim Wheeler's "Feels Like Summer". The montage shows clips of a young farmer just starting out his career with a new flock of lambs. He bottlefeeds the smallest, Shaun, and lets the little ones run and play with his new puppy Bitzer. Sometimes he plays with them as well, and they are a big happy family of sorts. He also takes a photograph of himself holding baby Bitzer and baby Shaun, with the rest of the lambs gathered round them. He keeps this photograph for many years.

Time fast-forwards to the present day, and Shaun, living with his flock at Mossy Bottom Farm, is bored with the routine of life on the farm. One day, he concocts a plan to have a day away, by tricking The Farmer into going back to sleep by counting his sheep repeatedly. However, the caravan in which they put the farmer to bed accidentally rolls away, taking him the entire way into the city. Bitzer, the farmer's dog, goes after him, ordering the sheep to stay on the farm until he returns.

The Farmer receives a blow to the head and is hospitalized, where he is diagnosed with amnesia, and leaves the hospital. Bitzer is looking at Farmer Hospital but enters an operation and distracted by a bone is captured and thrown out of the hospital. The Farmer wanders into a hair salon, where he cuts a celebrity's hair as if he was shearing a sheep. The celebrity loves it, which leads the farmer to be known as the mysterious hair stylist "Mr. X".

Meanwhile, Shaun and The Flock find life impossible without The Farmer, so Shaun sneaks on a bus to the city; the rest of the flock follow him on another bus. He manages to disguise them as people and they begin looking for The Farmer. They go to a restaurant to rest but Shaun accidentally displayed as an animal and is captured by Trumper, an over-zealous animal-control worker who hates animals without leaving any animals that escape and wants the attention of people from The Big City. Shaun is reunited with Bitzer in the animal lock-up, and with the help of a homeless dog named Slip, they escape and Lock up Trumper in a genuine trap. They find The Farmer, but he does not recognize Shaun, who is heartbroken by his owner's hostility.

Feeling unwanted, Shaun, Bitzer, and the flock make a makeshift home in an alley. Shaun and The Flock they decide to sing to Timmy and The Farmer listen the song and remebers having heard before. Despite this, he throws the note of "Memory Loss" and Shaun learns about The Farmer's memory loss, and he and the flock devise a plan, which involves putting The Farmer and everyone else to sleep with the sheep-counting trick, returning him to the trailer on a pantomime horse (really the sheep in an elaborate disguise), and hooking the caravan up to a bus returning to Mossy Bottom Farm. The plan is initially successful, but they are pursued by Trumper who becomes insane and intent on killing them outright and follows them to the farm.

At the farm, the group hide in a shed, which Trumper tries to push into a nearby rock quarry with a tractor. Fortunately, The Farmer wakes up and regains his memory. Shaun takes the tractor and saves everyone to fall, but Trumper grabs Shaun and throws it in the quarry. Luckly, the Farmer saves Shaun, he complints Trumper and forces him to confront, when Trumper is about to escape but in the same time, he tries to reason with the Farmer for his misunderstanding. Behind, a Bull for the farm pushes Trumper and after that, Trumper is defeated. The Farmer and the animals have a renewed appreciation for each other, and the next day, the Farmer and Bitzer cancels the day's routine activities. Slip leaves, but is adopted by a bus driver who finds her on the road. The animal-control service is turned into animal-protection centre, and Trumper, no longer welcome there, finds work wearing a chicken suit to promote a restaurant.

In a mid-credits scene, the farmer witnesses the events caused by his oblivious self and the animals on the news, as the animals watch in horror. After that, The Rooster comes by carrying a sign that says "The End", but the credits end up covering it

Before the final credits the rooster appears with a sign saying "The End". As the credits move up the screen, The Rooster jumps in order to stay visible but is finally covered up. When the credits come to an end we see the rooster again, now playing a game on his mobile phone. He notices us, turns the sign round to show the words "Go home" and walks off. The screen is blank for a moment, then a sheep appears with a vacuum cleaner. 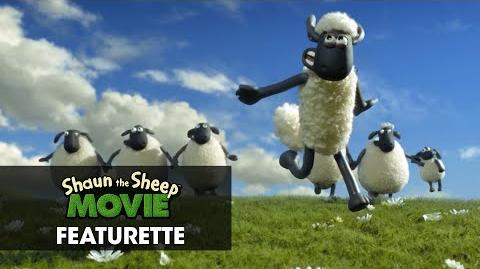 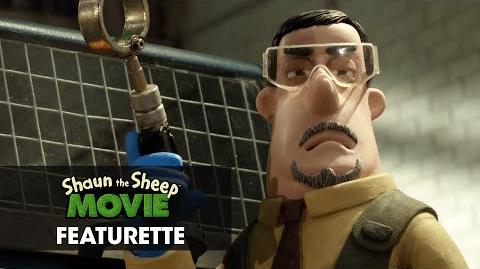 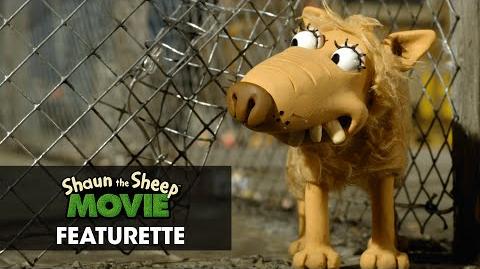 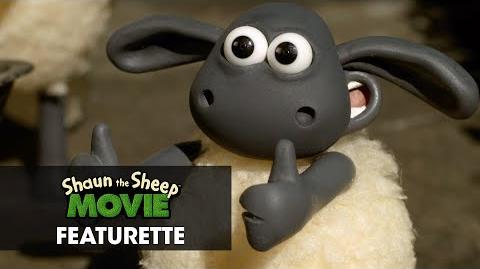 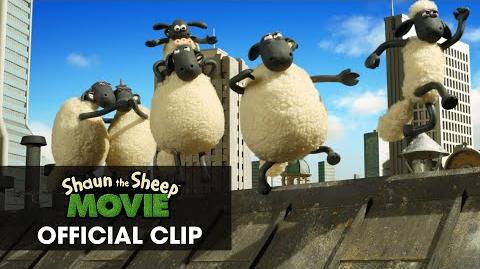 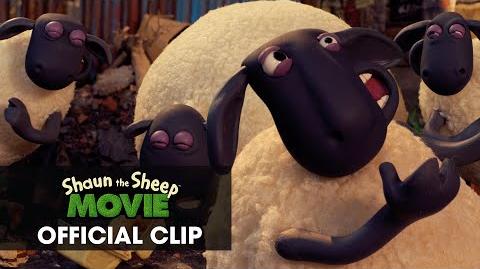 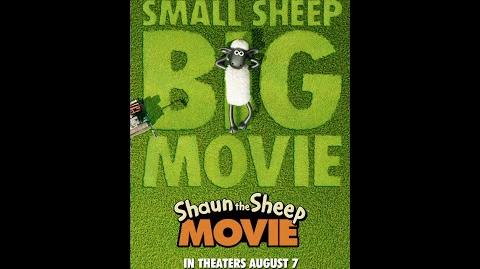 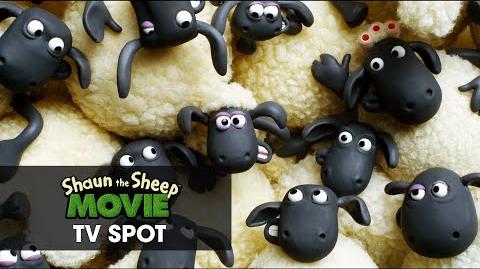 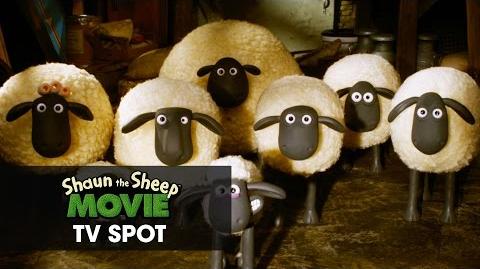 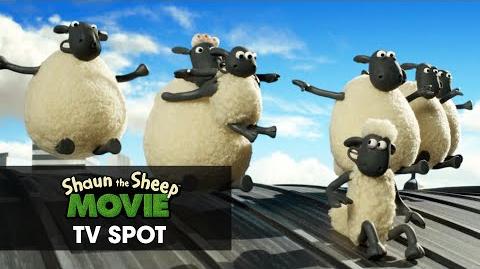 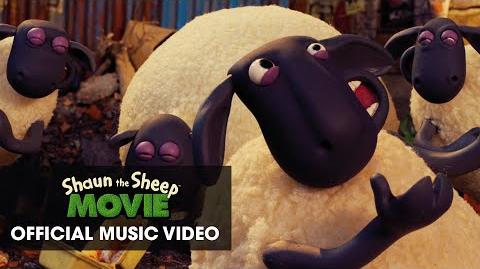 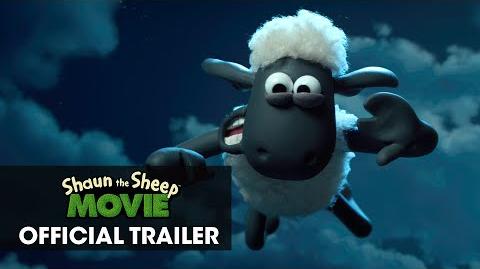 Fantastic Four spoof
Shaun the Sheep Inova Out-poster-01.jpg
Inside Out spoof
Add a photo to this gallery

Retrieved from "https://movies.fandom.com/wiki/Shaun_the_Sheep_Movie?oldid=219319"
Community content is available under CC-BY-SA unless otherwise noted.