watch 02:03
Wiki Targeted (Entertainment)
Do you like this video?
Play Sound
She Creature 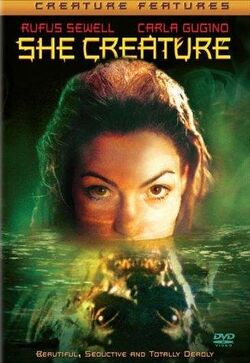 She Creature (originally titled Mermaid Chronicles Part 1: She Creature) is a 2001 television film starring Rufus Sewell, Carla Gugino and Rya Kihlstedt and directed by Sebastian Gutierrez. It is the first in a series of films made for Cinemax paying tribute to the films of American International Pictures. The films in this tribute series reused the titles of old American International Pictures films, but are not remakes of the earlier films.

Circa 1900, in Ireland, two carnies, Angus Shaw (Rufus Sewell) and his wife Lillian (Carla Gugino), abduct a mermaid (Rya Kihlstedt) and try to smuggle her into the United States. As their ship appears to lose its way, the mermaid begins to show a deadly, carnivorous side.

Rated R for sexuality, nudity and some violence.

She Creature has been met with negative reviews. The film currently holds a rating of 20% on review aggregator Rotten Tomatoes.

Retrieved from "https://movies.fandom.com/wiki/She_Creature_(2001)?oldid=121201"
Community content is available under CC-BY-SA unless otherwise noted.