Start a Wiki
watch 01:48
The Loop (Movies)
Do you like this video?
Sherlock Holmes: A Game of Shadows 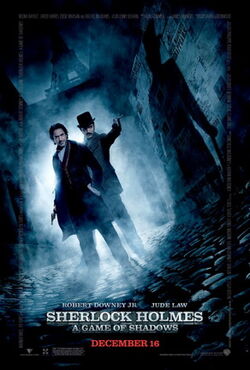 Sherlock Holmes: A Game of Shadows is a 2011 British-American action mystery film directed by Guy Ritchie and produced by Joel Silver, Lionel Wigram, Susan Downey, and Dan Lin. It is a sequel to the 2009 film Sherlock Holmes, based on the character of the same name created by Sir Arthur Conan Doyle. The screenplay is by Kieran Mulroney and Michele Mulroney. Robert Downey, Jr. and Jude Law reprise their roles as Sherlock Holmes and Dr. John Watson, respectively, as the duo join forces to outwit and bring down their most cunning adversary, Professor Moriarty, played by Jared Harris.

Sherlock Holmes (Robert Downey, Jr.) has always been the smartest man in the room…until now. There is a new criminal mastermind at large—Professor James Moriarty (Jared Harris)—and not only is he Holmes’ intellectual equal, but his capacity for evil, coupled with a complete lack of conscience, may actually give him an advantage over the renowned detective. When the Crown Prince of Austria is found dead, the evidence, as construed by Inspector Lestrade (Eddie Marsan), points to suicide. But Sherlock Holmes deduces that the prince has been the victim of murder—a murder that is only one piece of a larger and much more portentous puzzle, designed by one Professor Moriarty. Mixing business with pleasure, Holmes tracks the clues to an underground gentlemen’s club, where he and his brother, Mycroft Holmes (Stephen Fry) are toasting Dr. Watson (Jude Law) on his last night of bachelorhood. It is there that Holmes encounters Sim (Noomi Rapace), a Gypsy fortune teller, who sees more than she is telling and whose unwitting involvement in the prince’s murder makes her the killer’s next target. Holmes barely manages to save her life and, in return, she reluctantly agrees to help him. The investigation becomes ever more dangerous as it leads Holmes, Watson and Sim across the continent, from England to France to Germany and finally to Switzerland. But the cunning Moriarty is always one step ahead as he spins a web of death and destruction—all part of a greater plan that, if he succeeds, will change the course of history.

After the success of the 2009 film Sherlock Holmes, a sequel was fast tracked by Warner Bros. with director Guy Ritchie dropping out of an adaptation of Lobo and Robert Downey, Jr. leaving Cowboys & Aliens.[11] It was unclear if Rachel McAdams would appear in the film. McAdams said, "If I do, it won't be a very big thing. It's not a lead part".[12] On 4 February 2011, Warner Bros. confirmed to Entertainment Weekly that McAdams will play a part in the sequel.[6]

The film is reported to be influenced by Conan Doyle's The Final Problem.[13] While the film takes place a year after the events of the first film,[13] Sherlock Holmes: A Game of Shadows is intended to be a stand-alone film that doesn't require knowledge of the previous film.[13]

In October 2010, Downey, Jr. and Jude Law were seen rehearsing a fight scene as shooting took place in Richmond Park, south-west London.[14] In October 2010 steamship PS Waverley was chartered on the English Channel for filming, and a large green screen was erected at Didcot Railway Centre with a large action scene filmed there in mid-November.[3] In late November, a scene was filmed at Victoria Bridge, which is part of the Severn Valley Railway. In January 2011 scenes were also filmed at Hampton Court Palace. Filming also took place in September 2011 in Greenwich at the Royal Naval College.[15]

In early February 2011, principal photography moved for two days to Strasbourg, France. Shooting took place on, around and inside the Strasbourg Cathedral. The scene is said to be the opening scene of the film, as it will cover an assassination/bombing in a German-speaking town.[16]

The soundtrack to this film will be composed and produced by Hans Zimmer. The release of this soundtrack is set to date on 13 December 2011. Purchase of the physical, enhanced CD includes an insert allowing the free download of three bonus tracks from the score. Here shows the following tracks of this album:

The film has gotten generally positive reviews, currently holding a 74% fresh rating based on 34 reviews.

Retrieved from "https://movies.fandom.com/wiki/Sherlock_Holmes:_A_Game_of_Shadows?oldid=81068"
Community content is available under CC-BY-SA unless otherwise noted.