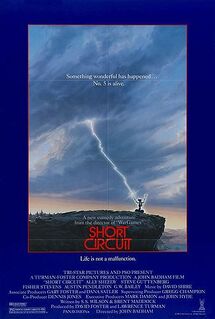 Number 5 is part of a series of prototype U.S. military robots built for use in the Cold War by Nova Laboratories. The series' inventors, Newton Graham Crosby and Ben Jabituya, are more interested in peaceful applications including music and social aid. After a demonstration of the robots' capabilities, Number 5 is hit by a lightning-induced power surge. Several incidents allow the robot to accidentally escape the facility, barely able to communicate and uncertain of its directive. A chance encounter with animal-lover Stephanie Speck (who mistakes Number 5 for an extraterrestrial visitor) grants Number 5 access to books, television and other stimuli, allowing him to learn at a rapid pace to satisfy his demand for 'input'. Number 5 develops a whimsical and curious personality. When Stephanie realises Number 5 is in fact a military weapon, she contacts Nova who send out a team to recover him. Meanwhile, Number 5 accidentally crushes a grasshopper he gains an understanding of mortality and that if Nova disassembles him he will cease to exist. Frightened, Number 5 steals Stephanie's van and flees, but the pair are eventually cornered by Nova, and Newton and Ben. Stephanie attempts to convince them of his sentience, but Number 5 is eventually disabled and sent back to Nova.

From this follow several adventurous escapes from the soldiers led by Nova's security chief Captain Skroeder (G. W. Bailey). Having humiliated Frank and the four remaining prototypes, Stephanie and the robot convince Newton of the robot's sapience; but are cornered by Nova's security and the Army, who destroy a duplicate robot (built by Number 5 himself) in mistake for their quarry. With the project that spawned the robots ruined, Nova's President Dr. Howard Marner fires Skroeder for disobeying orders to capture Number 5 intact. In tears, Stephanie leaves with Newton, who decides to emigrate to his family's estate in Montana. Having revealed himself to them, Number 5 (renaming himself "Johnny Five" after the song "Who's Johnny") accompanies Stephanie and Newton.

Retrieved from "https://movies.fandom.com/wiki/Short_Circuit?oldid=109836"
Community content is available under CC-BY-SA unless otherwise noted.