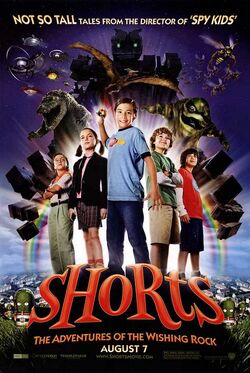 Shorts (also known as Shorts: The Adventures of the Wishing Rock poster title or Shorts: A Not-So-Tall Tale trailer title) is a 2009 American familycomedy/adventure film written and directed by Robert Rodriguez. It was released in the United States on Otober 2, 2009.[2] A Nintendo DS video game of the same name was announced on July 28, 2009, with a prospective July release date in advance of the movie.[3]

The story is told in a series of shorts shown in non-chronological order.

The Blinkers Characters: Eddie and Betty

The movie starts before the logo with a pair of twins (Cambell Westmoreland and Zoe Webb) who decide to have a staring contest. The game throughout the course of the movie as a running gag. Both brother and sister lose because their mom snapped her fingers in front of their faces, causing both to blink at the same time. As they wondered who won the game they began a new round, which starts the logo and begins the film.

Toby "Toe" Thompson (Jimmy Bennett) begins telling the story from his point of view and explaining The Black Box Inc, where all the adults work. It is this company that creates the "Black Box", a small cube that can fill any technological need and which every adult at Black Falls works at. Toe goes to school only to be bullied by his worst enemy Helvetica "Hel" Black (Jolie Vanier) and her brother Cole (Devon Gearhart). Toe speculates in front of everyone that Hel loves him, which infuriates Hel. As Toe walks home Cole and his gang start throwing rocks at Toe, one of which is the rainbow colored wishing rock. Toe wishes for friends which come in the form of small aliens. Toe takes the aliens to school, which leads to a series of events ending with Toe and Hel falling from the school's roof with broken arms. The aliens leave, but Toe keeps the rock. One alien says Toe has friends all around, but he doesn't know it.

The Wishing Rock appears for the first time in front of the Short's House. The three brothers Loogie (Trevor Gagnon), Laser (Leo Howard), and Lug (Rebel Rodriguez) use the rock to wish for a giant fort. The brothers start an argument on who gets to wish for something and the rock ends up falling into the fort's "canyon", which Loogie filled with snakes and alligators. The brothers escape with the rock and try to decide what to do with it. Lug and Loogie prefer to use it for fun, but Laser wants to use it wisely. To solve the dilemma, Loogie wishes that one of them was super smart but, as he was not more specific, the power is given to their nearby infant sister (portrayed by Bianca Rodriguez and voiced byElizabeth Avellan) who convinces the boys to lose the rock into a pile of dirt, where Cole finds it the next day to throw it at Toe.

Toe's older sister Stacey (Kat Dennings) arrives to tutor "Nose" Noseworthy (Jake Short), Toe's old germaphobic friend. Nose picks his nose against his father's wishes and accidentally flicks the booger into his father's radioactive work study. Toe and Loogie, now friends, arrive at Nose's house in time to see Nose's booger mutate into a giant monster. They leave as quickly as possible, but Toe gets caught by the booger. Nose rescues him by saying that if the booger mutant should eat his friend, Nose will eat the booger's friend (another booger), and the two run out of the house as soon as the booger mutant gives in to Nose's commands. After helping Nose's father (William H. Macy) capture the monster outside of the house, Toe and Loogie take the rock and leave.

Mrs. and Mr. Thompson (Leslie Mann and Jon Cryer) are having trouble with their relationship, as Mr. Carbon Black (James Spader) forces them to compete in making a new sales idea for the black box. Mrs. Thompson goes to look at Toe's phone, and finds the rock on the floor in his room. She takes the rock just as Toe wakes up. She and Mr. Thompson go to a Black Box Inc. costume party. While on the patio of Mr. Black's house, she wishes that she and her husband were closer, due to the fact that earlier, Mr. Thompson texted her hugs and kisses, while literally standing right next to her. They become mutated together into a two-headed person and try to hide from Mr. Black. He finds them and invites them inside (thinking they're wearing a costume). Meanwhile, Toe realizes that Mrs. Thompson took the rock and rushes to the costume party, despite Helvetica warning him against coming. Hel finds the rock as Toe arrives to try and explain its power. Toe is interrupted by Cole, who dumps him in the garbage. An infuriated Hel wishes Cole into a dung beetle before losing the rock. The rock is found by Mr. Black who, unaware of its power, accidentally wishes for all of the employees to go for each others throats. In the chaos, Toe retrieves the Rock and wishes everyone back to normal including his parents. Hel takes the stone, wishes off her casts and escapes before Toe throws the rock as far as he can, where it lands at the Noseworth's house.

The End Characters: Everybody

After the events of episode 4, Toe and Loogie contemplate what to do with the rock. They are ambushed by the rest of the kids and they all fight over the rock until it winds up in the hands of Mr. Black. Mr. Black wishes that he was the most powerful thing in the world. He turns into a giant Black Box and the children team up to stop him. Soon, the infant tells them that the rock is starting to feel misused, as shown by the fact that the rock starts undoing all of their wishes. She also tells them the rock could destroy the Earth because of all of the petty wishes they make. Together they get rid of it and all of the events that happened because of the wishes disappear. Mr. and Mrs. Thompson state they plan to work together to Mr. Black who agrees. He later reverts the Black Box into the Green Box, suggesting it to be more environmental. Mr. Noseworthy and son lose their germaphobia, Mr. and Mrs. Thompson become closer, and last it is suggested that Hel and Toe will marry in the future. All the children become friends and walk off while stating they wished their story became a Hollywood movie, breaking the 4th wall and concluding the movie.

Reviews for the film have been mixed. The film holds a rating of 45% on Rotten Tomatoes based on 93 reviews with the conclusion, "Shorts has imagination and energy, but most viewers beyond elementary school will likely tire of the kiddie humor and sensory overload".[4]

For its opening weekend, the film made $6,410,339 upon an average of $2,065 from 3,105 theaters. It opened at #6, being overshadowed by Inglourious Basterds, G.I. Joe: The Rise of Cobra, and Julie & Julia. Overall, the film was a minor success at the box office, grossing about $20.9 million in the United States and Canada, and about $28.9 million worldwide. It is considered a financial disappointment compared to other films that Robert Rodriguez has directed, making only a third of what the Spy Kids films had made.