for mild language and some crude humor 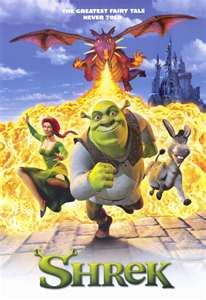 The rights to the books were originally bought by Steven Spielberg in 1991, before the founding of DreamWorks, when he thought about making a traditionally animated film based on the book. However, John H. Williams convinced him to bring the film to DreamWorks in 1994, the time the studio was founded, and the film was put quickly into active development by Jeffrey Katzenberg after the rights were bought by the studio in 1995. Shrek originally cast Chris Farley to do the voice for the title character, recording about 80%–90% of his dialog. But since Farley died in 1997 before he could finish, Mike Myers was put in to work for the character, who after his first recording decided to record his voice in a Scottish accent. The film was also originally planned to be motion-captured, but after poor results, the studio decided to get PDI to help Shrek get its final computer-animated look.

Earning $484.4 million at the worldwide box office, the film was a critical and commercial success. Shrek also received promotion from food chains such as Baskin-Robbins (promoting the film's DVD release) and Burger King. It was acclaimed as an animated film worthy of adult interest, with many adult-oriented jokes and themes but a simple enough plot and humour to appeal to children. Shrek won the first ever Academy Award for Best Animated Feature and was nominated for the Academy Award for Best Adapted Screenplay. The film was also nominated for six BAFTAs, including the BAFTA Award for Best Actor in a Supporting Role for Eddie Murphy for his voice-over performance as Donkey, and won the BAFTA Award for Best Adapted Screenplay. The film's main (and title) character was awarded his own star on the Hollywood Walk of Fame in May 2010.

Shrek established DreamWorks Animation as a prime competitor to Pixar in the field of feature film animation, particularly in computer animation. The film's success prompted DreamWorks to create three sequels, Shrek 2, Shrek the Third, and Shrek Forever After, two holiday specials, Shrek the Halls and Scared Shrekless, and a spin-off film, Puss in Boots. A fifth film, planned as the last of the series, was cancelled in 2009 with the announcement that the fourth film would conclude the series. The film's success also inspired other merchandise, such as video games, a stage musical and even a comic book by Dark Horse Comics.

The movie starts in the woods. Shrek decides to travel the country to see Lord Farquaad to try to regain his privacy, but an energetic and talkative donkey named Donkey (who escaped from guards who went after him, and was saved by Shrek) tags along. The two make it to Farquaad (John Lithgow)'s palace in Duloc and come across a knight tournament to decide who will rescue Princess Fiona from a castle surrounded by lava and protected by a fire-breathing dragon so that Farquaad may marry her. Shrek and Donkey easily best the other knights, and Farquaad agrees to nullify his order if Shrek goes on to rescue Fiona (Cameron Diaz), a deal that Shrek agrees to.

Shrek and Donkey travel to the castle and split up to find Fiona. Donkey manages to encounter the dragon (Frank Welker {uncredited}), sweet-talking the beast to save himself when he finds out the dragon is a girl dragon, and she takes a liking to Donkey, taking him back to her chambers. When Shrek finds Fiona, she is appalled at his lack of romanticism. As they're leaving, Shrek manages to save Donkey, caught in the dragon's tender love, and making the dragon become irate, chasing Shrek, Fiona, and Donkey out of the castle, but unable to follow.

At first, Fiona is thrilled to be rescued, but quickly becomes disgusted to find out that Shrek is an ogre. The three make their return journey to Farquaad's palace, with Shrek and Fiona finding they have more in common with each other along the way, and falling in love. However, at night, Fiona doesn't want to camp with Shrek and Donkey, taking shelter in a nearby cave until morning. The next night, Fiona takes shelter in a nearby windmill. When Donkey hears strange noises coming from the windmill, he finds that Fiona has turned into an ogress. Fiona explains that she was cursed as a kid and turns into an ogress every night, which is why she was locked away in the castle, and that only a kiss from her true love will return her to her proper form. In spite of herself, she starts crying and blows her nose into her own hands. Shrek overhears them talking, and, thinking that they're talking about him being ugly, walks off sad, believing that she can't accept his appearance. Fiona promises Donkey to not tell Shrek, vowing to do it herself, but when the next morning comes, Lord Farquaad has arrived, led by Shrek, and he returns with her to the castle, while Shrek returns to the now-vacated swamp.

Shrek soon realizes that despite his privacy, he's miserable and misses Fiona. Donkey shows up to tell him that Fiona will be getting married shortly, urging Shrek into action to gain Fiona's true love. The duo travel to the fortress quickly, thanks to Dragon, who escaped her confines and followed Donkey. They interrupt the wedding before Farquaad can kiss Fiona, but not before the sun sets, making Fiona turn into an ogress in front of everyone. Angry over the change, Lord Farquaad orders his knights Shrek and Fiona killed, but Dragon gobbles up Farquaad whole, making the knights run away in terror. Shrek and Fiona admit their love for each other and share a kiss; Fiona is bathed in light as her curse is broken, but leaving her as an ogress, a form that she wasn't expecting, but that Shrek finds beautiful. The two get married and depart on their honeymoon, living "ugly ever after".

WARNING: You MUST provide OFFICIAL sources for the Additional Voice/ADR Group WITHOUT IMDb, Wikipedia, or other Fandom wikis as they are NOT official sources.

Shrek received critical acclaim from critics with a score of 88% based on 204 reviews with an average score of 7.82/10 on Rotten Tomatoes.