watch 01:29
Wiki Targeted (Entertainment)
Do you like this video?
Play Sound
Shrek Forver After 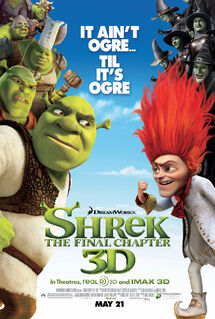 Shrek Forever After is a 2010 American computer-animated comedy drama film directed by Mike Mitchell, produced by DreamWorks Animation and distributed by Paramount Pictures.

It is a sequel to Shrek the Third and the fourth and last installment of the Shrek franchise. It focuses on Shrek signing a deal with Rumpelstiltskin to be a true ogre for a day but he founds himself trapped in an alternate timeline where he was never born and has only one day to get his life back before he disappears.

The film was released on May 21 2010. Despite receiving mixed reviews from film critics, the film was positively welcomed from audience and fans that defined it a big improvement over its mediocre predecessor and was a huge box office success.

During the events of the first film, King Harold and Queen Lillian approach Rumpelstiltskin and ask for him to release Fiona from captivity. Rumpel agrees on the condition that the kingdom of Far Far Away becomes his. As Harold is about to sign the contract, they are notified of Fiona's rescue by Shrek, and tear up the contract. Angered, Rumpel wishes Shrek were never born. In the present, Shrek has grown steadily tired of being a family man and celebrity among the local villagers, leading him to wish for when he felt like a "real ogre" again. When he takes his family to Far Far Away to celebrate his children's first birthday, a series of mishaps further injure his ego, causing him to lose his temper and walk out in anger. Shrek encounters Rumpelstiltskin, who seizes his chance, having observed Shrek's angry outburst. He follows Shrek and arranges for Shrek to appear to save his life. He gives Shrek a day to live like a real ogre, in exchange for a day from his childhood that he would not remember being erased to "thank" him. Shrek signs the contract and appears in an alternate reality where the events starting from Fiona's rescue are irrelevant. Now feared by villagers, he takes the opportunity to cause some lighthearted mischief until he finds "WANTED" posters for Fiona and his home deserted and desolate. He is kidnapped by witches and taken to Rumpel, now the King of Far Far Away, which has become derelict and run down. Upon inquiry, Rumpel reveals that he took away the day Shrek was born. Therefore, Shrek never saved Fiona or met Donkey, and consequently Rumpel was able to get King Harold and Queen Lillian to sign their kingdom away, making them both disappear. When the day ends, Shrek will disappear as well. Shrek escapes Rumpel's castle with Donkey. Initially terrified of Shrek, Donkey decides to trust him after seeing Shrek cry over his erased history, something he had never seen an ogre do before. After Shrek explains the situation, Donkey helps him find a hidden exit clause: the contract can be nullified by "true love's kiss". They soon encounter a band of ogres who are resisting Rumpel. The ogres are led by a still-cursed Fiona who, after escaping from the tower where she was held captive, keeps the retired and overweight Puss in Boots as a pet. Shrek does everything he can to gain Fiona's love, but she is too busy preparing an ambush on Rumpel. She is also bitterly cynical and disillusioned about the power of true love and throws herself into planning Rumpel's capture. While sparring with her, Fiona begins to like Shrek, but stops short of kissing him. Puss encourages him to continue pursuing Fiona. During the ambush, the ogres are captured by the Pied Piper, though Shrek and Fiona escape with the intervention of Puss and Donkey. Shrek insists Fiona kiss him, saying it will fix everything; however, because in this altered timeline Fiona does not truly love him, the kiss does not work. When he hears that Rumpel is offering a wish to the one who brings him Shrek, Shrek turns himself in and uses the wish to free the other ogres, who storm the castle, battle the witches, and capture Rumpel. As the sun rises, Shrek begins to fade from existence, but Fiona, having fallen in love with him, kisses Shrek just before he disappears, restoring Shrek to his world just before he lashed out at the party. Shrek embraces his friends and family with a newfound appreciation for everything he has.

During the credits, there's a montage of the best moments from all the Shrek movies with "For Once in my life" by Steve Wonder playing concluding the franchise.

Retrieved from "https://movies.fandom.com/wiki/Shrek_Forever_After?oldid=313236"
Community content is available under CC-BY-SA unless otherwise noted.